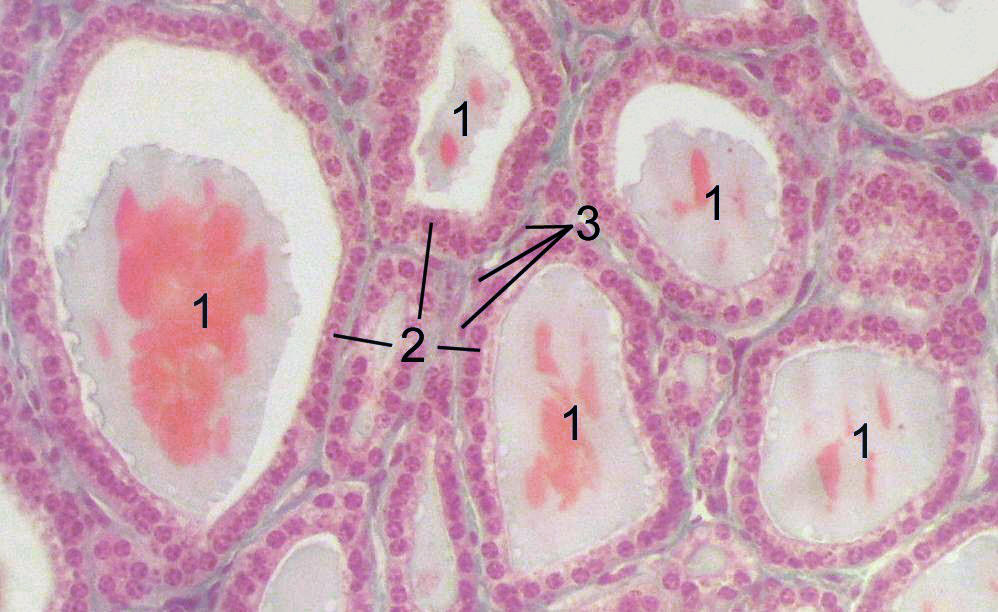 Unique challenges can arise when treating disease states in children.  Their physiology differs in ways that can have effects on both the disease progression and presentation, as well as on the effectiveness of treatment.  The autoimmune disorder Grave’s Disease is a prime example of this.  Although rare, affecting only 0.2-0.4% of American children, Grave’s disease is the cause of over 95% of pediatric hyperthyroidism.  Of the three classic signs of the disease, Grave’s ophthalmopathy, hyperthyroidism, and dermopathy, only the hyperthyroidism is usually present in pediatric cases, and it is often initially misdiagnosed as ADHD, as it is associated with behavioral disturbances and poor academic performance.  Physically, it is associated with weight loss, polydipsia, polyuria, rapid heart rate, and impaired skeletal mineralization, and untreated can lead to osteoporosis, congestive heart failure, and thyroid cancer. 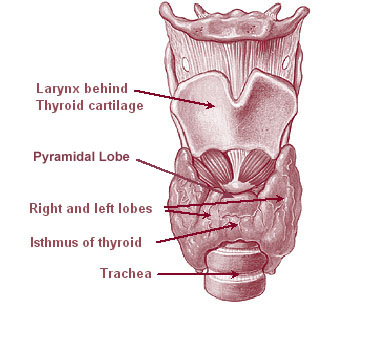 The thyroid gland begins as a group of cells in what will become the pharynx, which differentiate from the neighboring epithelium by expression of NK2 Homeobox 1 and Pax 8 .  These cells then thicken, disconnect and migrate to the front of the trachea where they undergo terminal differentiation and organization into follicles.  The follicles begin to express thyroid specific compounds and structures such as thyroglobin, thyroperoxidase, TSH receptor and Na+I– symporter.  Within 18-20 weeks of development, fetal thyroid hormone production begins.  Two thyroid hormones are secreted by the follicle cells, thyroxine (T4) which is largely a prohormone, and triiodothyronine (T3), and the parafollicular cells secrete calcitonin.  The thyroid hormones act through intranuclear receptors found in almost all body cells, and modulate gene expression.  Activation leads to increased O2 consumption in many tissues, increased carbohydrate consumption, growth, and protein anabolism, increased rate and force of heart beat and increased peripheral resistance.  Under normal conditions, thyroid hormones are only secreted when the receptors on the gland are bound by thyroid stimulating hormone (TSH), which is released from the anterior pituitary gland in response to low circulating thyroid hormone levels.  The binding of TSH to the thyroid gland also regulates mRNA levels of genes for thyroglobin and Na+I– symporter. 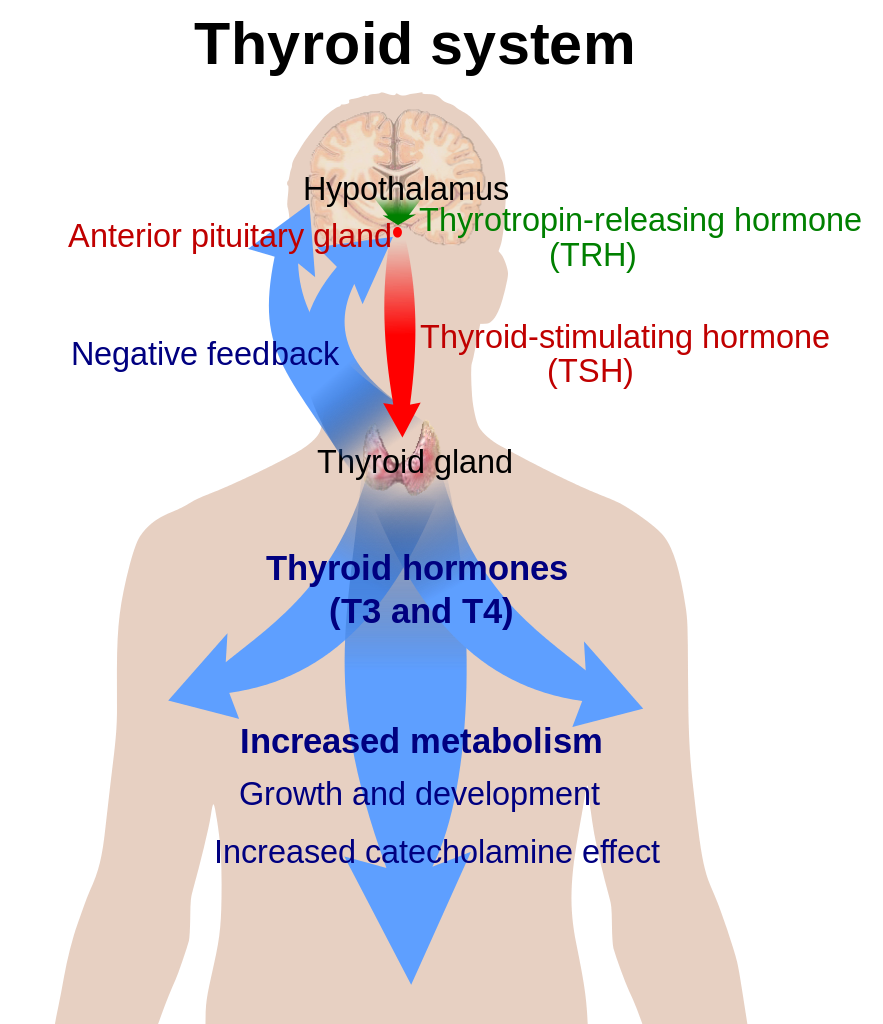 In individuals with Graves’ disease, the thyroid cells are intrinsically normal, the disease is due to an abnormal immune system acting on previously normal cells.  The abnormality arises from an IgG class immunoglobulin called thyroid stimulating immunoglobulin (TSI).  TSI binds to the extracellular domain of the TSH receptor and activates it causing follicular growth, activation and release of T3 and T4.  TSI binding also causes hypertrophy and hyperplasia of the thyroid cells.  The initial impetus for the production of TSI is unknown, but it has been found that the human leukocyte antigens HLA-DR3 and HLA-DGA1 alleles are associated with risk.  There have also been links found to polymorphism of CTLA-4 (cytotoxic T lymphocyte antigen 4).   TSI production begins in the cervical lymph nodes and bone marrow, as the disease progresses intrathyroidal lymphocytes become the major source of TSI.  Because of the TSI binding, circulating thyroid hormone levels become very high, in response, the body downregulates secretion of TSH, thus a definitive sign of Grave’s disease is blood tests showing elevated thyroid hormone with extremely low TSH levels.  The high circulating T3 and T4 levels lead to an overly rapid metabolism, and constant sympathetic nervous system stimulation.  Affected children are anxious, nervous, show exercise and heat intolerance, and experience weight loss and rapid heartbeat.  Since calcitonin secretion is also increased, osteoclast activity is in turn increased, leading to early epiphyseal closure in the long bones, and increased risk of osteoporosis in later life.  Even at the subclinical level there is an increase in fractures, particularly weight bearing bones due to both increased loss of bone and muscle weakness. 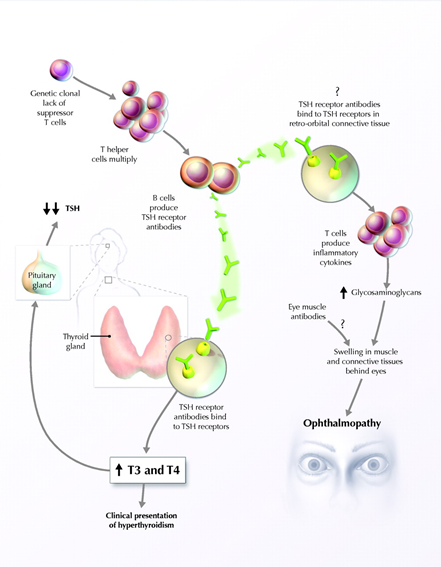 There are currently three treatment options for Grave’s disease, and unfortunately all present unique complications when used to treat children.  The antithyroid drugs, propylthiouracil (PTU) and methimazole are usually the first step, and they act by inhibiting thyroid peroxidase which attaches iodide to thyroglobin, inhibiting hormone synthesis.  The best case scenario for these drugs is to create a temporary or long-standing remission of the disease, the probability of which decreases with decreasing age.  However, PTU is no longer used for children in North America due to its rare fatal hepatotoxic effects, which are more common in children.  PTU was also found to accumulate in the neutrophils and may allow initiation of autoantibodies that lead to nephritis and vasculitis. More recently, methimazole has also been found to cause a rate of adverse effects in children (11%) similar to PTU (15%).  Alarmingly, Steven-Johnson syndrome  accounted for 3% of methimazoles adverse reactions in children.

The second treatment option available is the use of radioactive iodine.  The follicle cells of the thyroid gland are the only cells in the body with a Na+I– symporter which bring iodide into the gland, and a I–Cl– antiporter which transports it into the follicular space; so the radioactive iodine is localized to the target.  There is a great deal of controversy around radioiodine because of potential for teratogenic effects.  It was found, also, in the aftermaths of Chernobyl, Nagasaki, and Hiroshima, that the chance of thyroid cancer increased with decreasing age at time of exposure, with those under five being at most risk.  While treatment doses are generally much lower than such exposure levels, it complicates matters that while too high a dose increases rick of cancer, too low a dose does as well.  If the dosage is too low, some of the thyroid cells will survive, leading to a new cycle of constant stimulation, with subsequent hypertrophy and hyperplasia of remaining thyroid tissue, which increase cancer risk on its own, but if a second dose of radiation must be applied, the risk increases even more.  An inescapable effect of radioiodine treatment is the induction of hypothyroidism, as the body is now incapable of synthesizing any thyroid hormones.  Synthetic hormones have to be administered indefinitely, with their own, lesser complications.

Like radioiodine treatment, surgery to remove the thyroid gland completely, the third treatment option, induces hypothyroidism.   Also like radioiodine therapy, due to the potential for any remaining tissue to be stimulated, the entire thyroid gland must be removed. Because of proximity, there is also danger of damage to the parathyroid gland during the procedure.  Thyroidectomies have been performed successfully since 1883, and have a low associated death risk, 0-1%, however like the other treatment options, the risk of complications increases with decreasing age.   Children under seven have a 22% risk of complication with the procedure, which drops to 11% as they age.

There is no clear solution to treating Graves’ disease in childhood as of yet.  The average age of onset for the disease is usually between the ages of 40 and 60, when there is not as much concern for the long-long term effects.  For example, when treating middle-aged patients there just isn’t the same concern that treatment might harm potential future offspring as in the case of radioiodine therapy in children.  Pediatric patients have a higher rate of adverse reactions to the antithyroid medications than adult patients as well.  If the thyroid gland is eradicated, as in two of the treatment options, hypothyroidism is induced, and the child must take synthetic hormone for the rest of their lives.  Fortunately, the biggest complication with this treatment is mild cardiovascular abnormalities which can improve or disappear by reducing dosage to the lowest possible amount.  Overall, it is hoped that as we gain a deeper understanding of autoimmune diseases in general, we can find better treatment options for the children afflicted with them.