The Lymphatic system is a network of tissues and organs that plays an important role in immune function http://lymphatictherapy.co.za/manual-lymph-drainage/the-lymphatic-system/ .  Commonly people know about the circulatory

system moving blood around the body, the lymphatic system can be thought of in a similar fashion, but instead of moving blood around the body the lymphatic system moves a fluid called lymph.  This lymph fluid is comprised of infection fighting white blood cells that travel through lymphatic vessels collecting bacteria, viruses, cellular waste, toxins and proteins to name a few.  Once the lymph has collected the harmful substances it moves to a lymph node where the fluid is filtered by awaiting macrophages and lymphocytes http://www.ncbi.nlm.nih.gov/pubmedhealth/PMHT0022042/  which destroy the foreign material and kick it out into the blood stream for excretion from the body. Have you ever wondered as a young individual why your mother would feel the gland in your neck when you weren’t feeling well?  Well that gland is a lymph node and your mother is checking to see if it is swollen as this is a sign of an infection.  When experiencing an infection your lymphatic system is working overtime and the lymph nodes are overloaded, possibly due to a virus or bacteria that is taking a bit longer to destroy which causes the lymph nodes to swell.

You may have noticed in figure 1 that the current textbook view of the mapped lymphatic system does not show interaction with the brain.  Conventional lymphatic models have long thought that the brain lacked a connection to the lymphatic system.  So how does the brain get rid of its harmful waste?  The answer to this question has just been shown by the University of Virginia School of Medicine and the answer is the lymphatic system!!!  http://www.nature.com/nature/journal/v523/n7560/full/nature14432.html#t.  The authors goal was to find the gateway for lymphocytes (T-cells) into and out of the meninges (three membranes covering the brain and spinal cord) http://www.csuchico.edu/~pmccaffrey//syllabi/CMSD%20320/362unit3.html.  They dissected the meninges of mice using an innovative technique that they developed which fixes the membrane prior to removal in order to stabilize it. Low and behold they could visually see, under a high powered microscope, small vessel-like patterns that resemble lymphatic vessels.  They then took anesthetized mice and injected a tracking dye to monitor the path and found that these vessels carried immune cells from the cerebrospinal fluid, along veins in the sinuses, into lymph nodes.  They then thought if mice have them then there is a good chance that humans will also have them after which an autopsy of human meninges also revealed these vessels.  So how did these important vessels get overlooked for all these years?  Well these vessels are very small and run right alongside of blood vessels (which are much bigger) so can easily get overlooked/hidden from previous dissection techniques.

What does this mean for neurological disorders?  Neurological disorders are classified as diseases of the brain, spine and the nerves that connect them.  There are over 600 that have been identified such as brain tumors, Parkinson’s, Alzheimer’s, epilepsy and stroke https://www.ucsfhealth.org/conditions/neurological_disorders/.  In the case of Alzheimer`s disorder there is no cure and only a basic understanding as to what is the cause.  In this disease the brain accumulates “plaques” which essentially act to choke off cell-cell signaling and other vital functions of the cell resulting in the brains living cells dying off http://www.alzheimer.ca/en/About-dementia/Alzheimer-s-disease?gclid=CMDou9Gu_8sCFceCfgod19MLqw.  These plaques have 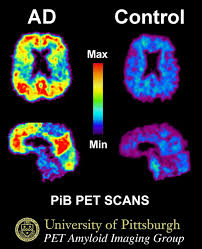 been determined to be beta-amyloid protein pieces from a larger protein found in the fatty membrane surrounding nerve cells that are chemically sticky and clump together ultimately forming a plaque around cells (Figure 2) https://www.alz.org/braintour/plaques.asp. Some research has found that during the day the brain accumulates these beta-amyloid pieces and when rem sleep ensues the cerebrospinal fluid circulates as the brain tries to flush out these toxins http://news.berkeley.edu/2015/06/01/alzheimers-protein-memory-loss/,   http://stm.sciencemag.org/content/4/147/147ra111.  Hypothetically the newly discovered lymphatic vessels in the brain could potentially be the brains sewage drain for these proteins and the vessels could be clogged and/or malfunctioning so that these protein pieces cannot flow out of the brain during the sleep cycle, ultimately causing certain neurological diseases.

Where do we go from here?  One of the next steps to figuring out if this is actually the cause of these plaques would be to comparatively examine the brains lymphatic vessel of patients with and without the disorder.  This will show if there is a difference in size, shape and function of these vessels which would give us insight into the mechanism and/or cause of acquiring certain neurological disorders and one day hopefully lead to a cure.