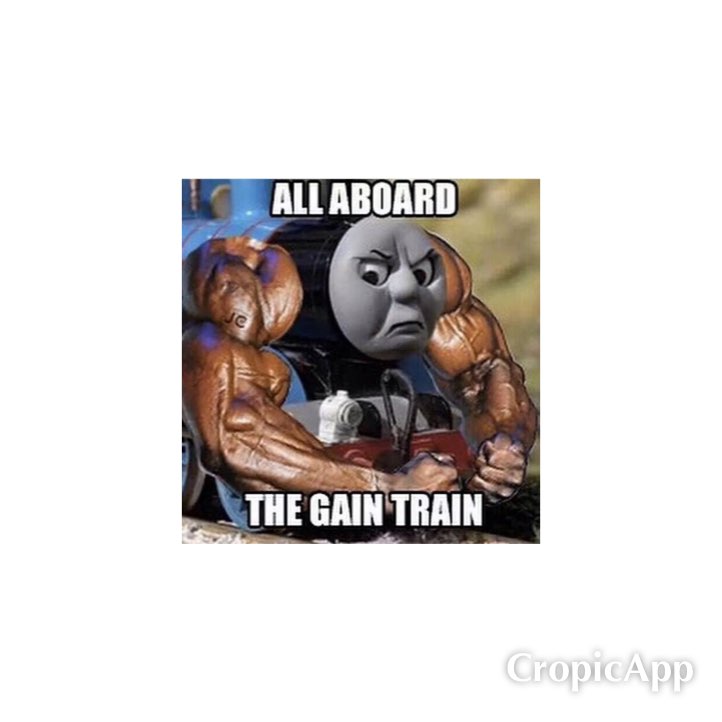 Skeletal muscle hypertrophy is becoming very popular in today’s society. For many, it may be desired for purely cosmetic reasons, while for others, such as high performance athletes, it is a by-product of many years of intense training and proper diet. Hypertrophy, by definition, is the increase in size of individual cells. In the case of skeletal muscle, it is the increased abundance of actin and myosin, which are contractile proteins. Hypertrophy is a natural result of an increased demand on the tissue for high amounts of work, and requires adequate calories, nutrients, and growth factors to occur. There are no known hypertrophic diseases in terms of uncontrolled, detrimental skeletal myocyte growth, however there are many diseases associated with the normal function of muscles and atrophy, such as the number of hereditary muscular dystrophies. Hypertrophy is not limited to skeletal muscle; it can also occur in organs such as the heart as a result of hypertension. Genetics also play a major role in the potential one possesses to achieve their desired (or required) level of muscularity.

The Physiology of Gainz

An adequate stimulus is the first thing that is required to stimulate hypertrophy as the muscle tissue adapts to an increased work load. This stimulus may be achieved through any activity that requires the muscle to produce a large amount of work. Activities such as weightlifting, cycling, or running can provide adequate resistance, although activities requiring large bursts of activity in a short amount of time have been shown to have the greatest hypertrophic benefit. This stems from the differences in muscle fibres within muscle tissue. There are three types of skeletal muscle fibres; Type I, Type IIA and Type IIB. Type I, known as slow twitch oxidative fibres, are the fibres that are primarily active during support and during long duration, low intensity activity, therefore have a high endurance threshold. They also happen to rely primarily on oxidative phosphorylation to generate energy, therefore have a higher concentration of mitochondria, and increased capillary density because of their need for oxygen, lipids, and carbohydrates. It is these fibres that athletes such as marathon runners and ironman competitors heavily rely on to get them through their gruelling races; they have been shown to hypertrophy through not only resistance exercise, but aerobic exercise as well. Both Type IIA and Type IIB fibres are in higher concentration in muscles that are required to produce a lot of force in a short amount of time; these are the muscle fibres that athletes such as bodybuilders and powerlifters tend to train primarily. The differences between Type IIA and B lie within the speed and duration of which they contract, as well as their sources of fuel. Type IIA, or fast twitch oxidative glycolytic fibres, rely on both glycolysis and oxidative phosphorylation for generation of ATP, and accomplish long duration anaerobic work. Type IIB rely exclusively on glycolysis for energy for short term anaerobic work (such as attempting a new one rep max on squats). Type IIB fibres have also been shown to convert to Type IIA as a result of resistance exercise, indicating an increase in oxidative capacity. Both Type II muscle fibres display the highest levels of hypertrophy, explaining why resistance training can produce massive figures like Arnold Schwarzenegger.

After this mechanical stimulus is applied and myotrauma is suffered, it is then time for cells known as satellite cells (which are the stem cells of skeletal muscle) to facilitate the hypertrophy process. Myotrauma is detected through a mechanical sensor imbedded in the cell membrane of myocytes by integrin proteins. The integrins then induce a cononical Wnt signalling pathway, which communicate with the satellite cells to induce their proliferation and activation. They then meet and fuse with the muscle fibre, donating their nuclei to the fibre to help with rehabilitation. It is unsure as to why the nuclei are donated, but speculation includes possibilities of extra copies of hypertrophic genes or more ribosomal subunits for the myocyte to translate more actin and myosin to adapt to the increased workload. As a result of the mechanical stress, the body produces a vast array of hormones, including growth hormone, IGF-1, and testosterone, which act on the muscle fibres to stimulate gene expression and protein production. 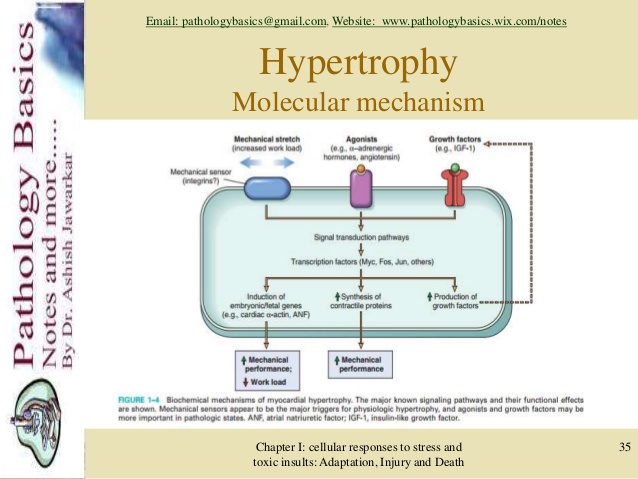 The Pathway To Gainz

There are numerous pathways in the cell that are associated with hypertrophy; one could write an entire blog post (or teach an entire class) on the multitude of pathways and hormones involved. One pathway, the mTOR pathway, paves the pathway to gains in this blog post. The mammalian target of rapamycin (mTOR) protein and the associated pathways have been hot topics of research since its discovery in 1991 by Dr. Michael N. Hall. mTOR itself is a protein, and in the cell it forms the core of two separate complexes: mTORC1 and mTORC2. mTORC1 is the complex that is responsible for regulation of virtually every cell growth and metabolism process; everything from lipid metabolism, to ribosome biogenesis, to cell growth (aka hypertrophy), just to name a few. It is comprised of the core mTOR protein, surrounded by GβL, DEPTOR, and Raptor. The primary pathway that the mTORC1 complex follows to regulate cell growth is by mTOR-dependant phosphorylation of p70S6K. This phosphorylation has been shown to be stimulated by the addition of androgens to castrated rats with active mTORC1, showing the relationship between androgens and hypertrophy, as well as the dependence of hypertrophy on the mTOR pathway. It has been observed in yeast that a more active TOR shortens their lifespan. This finding has lead researchers to hypothesize that, when TOR is more active in an organism, it will have a shorter life span, which prompts the question; does above average hypertrophy in humans correlate with a lower life expectancy? This would be a very interesting long-term topic of research. 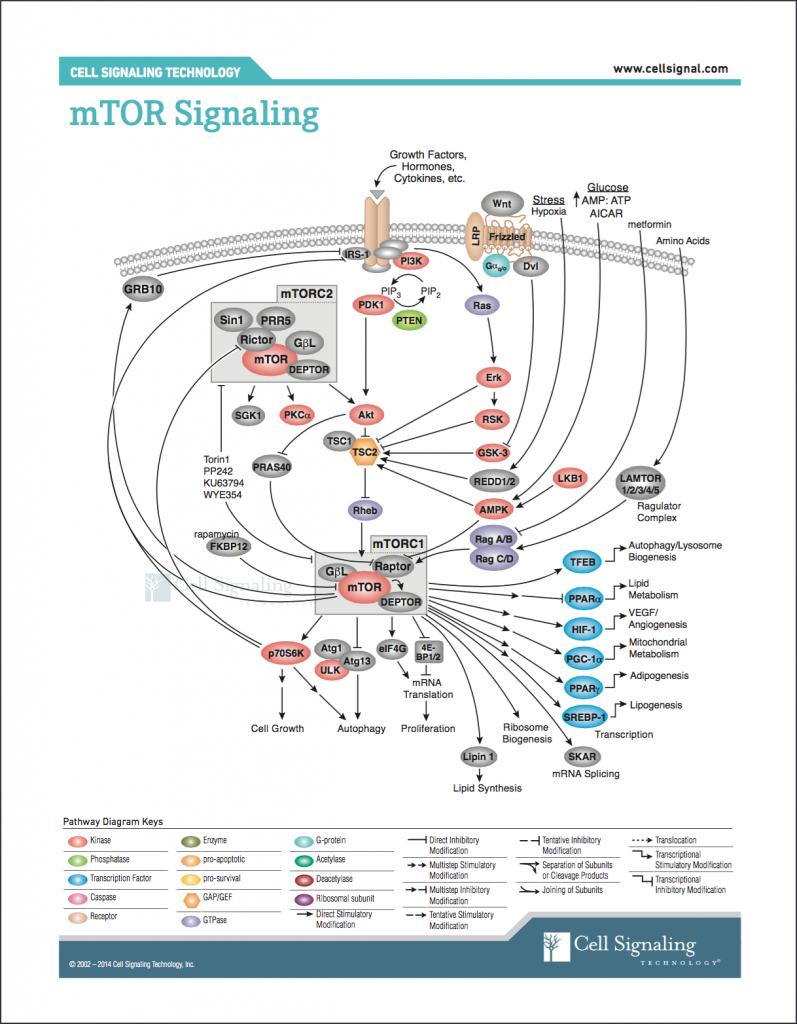 Got It From My Momma

Genes play a crucial role in determining the limits of hypertrophy in an individual. It is not only whether or not a certain gene is present, but also if there are certain mutations in hypertrophy limiting genes. Certain people that have higher levels of hypertrophy stimulating hormones will have a higher potential and a faster rate of hypertrophy when exposed to weight training. There are also individuals who have a mutation in their MSTN (myostatin) gene; the myostatin protein is a protein expressed in skeletal muscle fibres to inhibit growth, ensuring that the fibres do not grow to be too large. Therefore, a combination of having a genetically higher abundance of hormones and low levels of inhibitory myostatin would result in an individual with astronomical hypertrophic potential. Although there is a lack of concrete evidence, some exercise physiologists claim that through proper diet and exercise, without the use of anabolic steroids, one may only manipulate their genetic potential for hypertrophy by 20%. It is widely assumed in the bodybuilding community that many of the world’s top bodybuilders have this myostatin mutation, which allows them to achieve such boggling physiques (with a bit of help, of course…).

While there are no known hypertrophic diseases, there are many genetic muscular diseases known to cause atrophy, which is the decrease in size of individual cells, the opposite of hypertrophy. These diseases are known as muscular dystrophies, of which, Duchenne Muscular Dystrophy is by far the most prevalent. Duchenne muscular dystrophy affects 1 in 3600 boys worldwide, resulting in massive muscle wasting and premature death. Mutation in the dystrophin gene causes failure of the integrity of muscle fibres as the dystrophin protein is a key structural component in their cell membranes. This eventually leads to fibrosis of the muscle as fat and fibrous scar tissue replaces the wasted muscle tissue. The disease whittles away at the muscular structure of the persons body until they are entirely bound to a wheelchair and eventually cannot move. Life expectancy for those individuals with DMD is around 25 years.

The concept of manipulating ones body to achieve a physique of massive proportions is extraordinary. The process takes years to build upon; it is admirable of those who dedicate their lives towards the process so that average people may admire in awe. With increasing research into the mechanisms and ways to induce hypertrophy and strength train safely, more and more people are beginning to get into “recreational bodybuilding” as a way to stay healthy and improve joint function. As always, the pathway is not always straight and narrow; there are many things that can go wrong. The average person may not be able to achieve their desired body because they aren’t genetically endowed, however given the complexities of the various genetic diseases associated with skeletal muscle, the physiology of hypertrophy should be well respected.

Curing Diabetes in Less Than One Hour