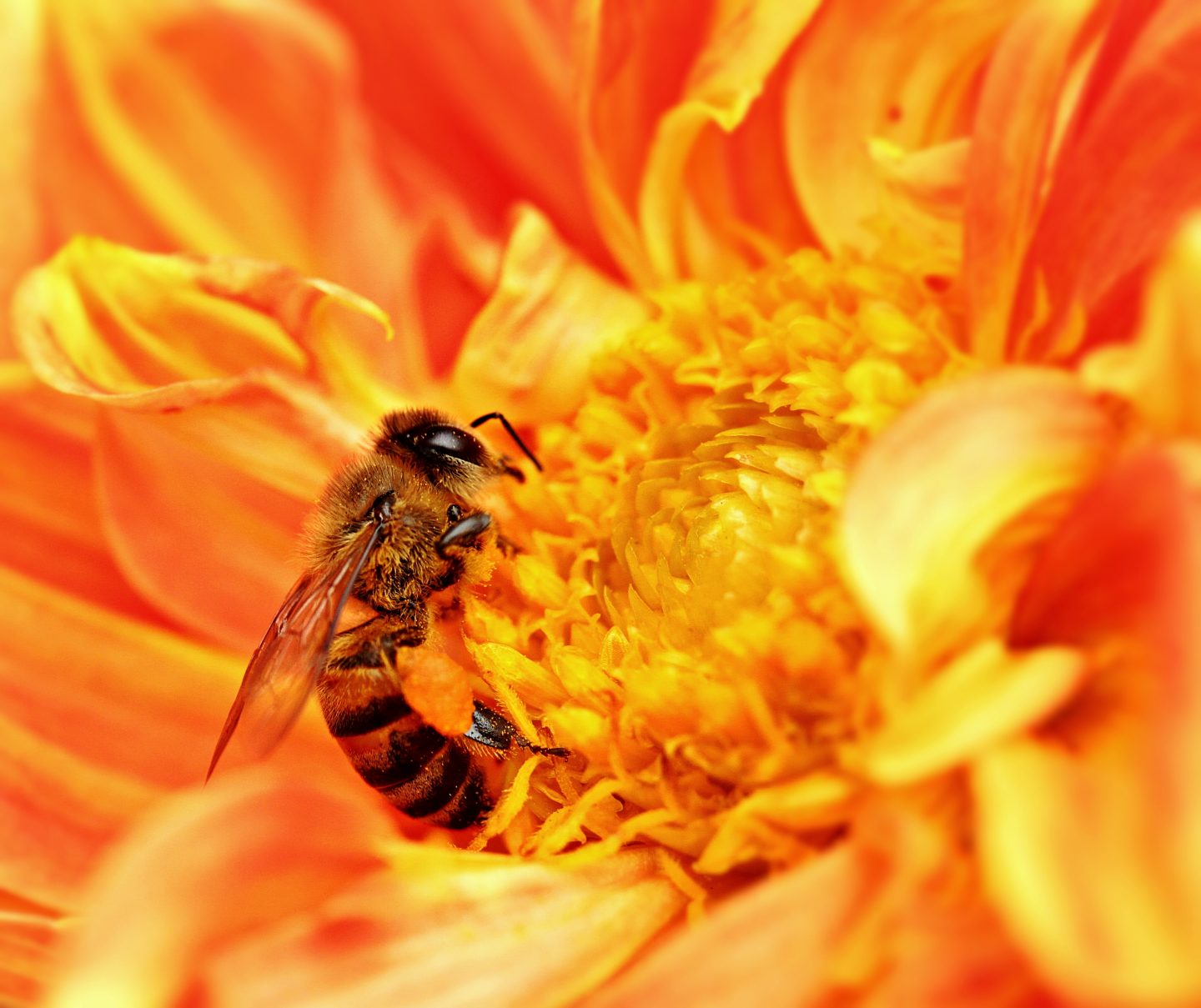 When most people think of bees, the first thing that likely pops into their head is honey. The liquid amber ambrosia of nature. For my family, this is especially true as beekeeping has been a large part of my family since I was 9 years old. This blog will not address the numerous nutritional benefits, deliciousness, and overall amazing qualities of qualities possessed by honey, nor the thrill of thousands of bees trying to sneak under your beekeeper’s veil. Instead, it will focus on another common topic people associate with bees. Their sting. 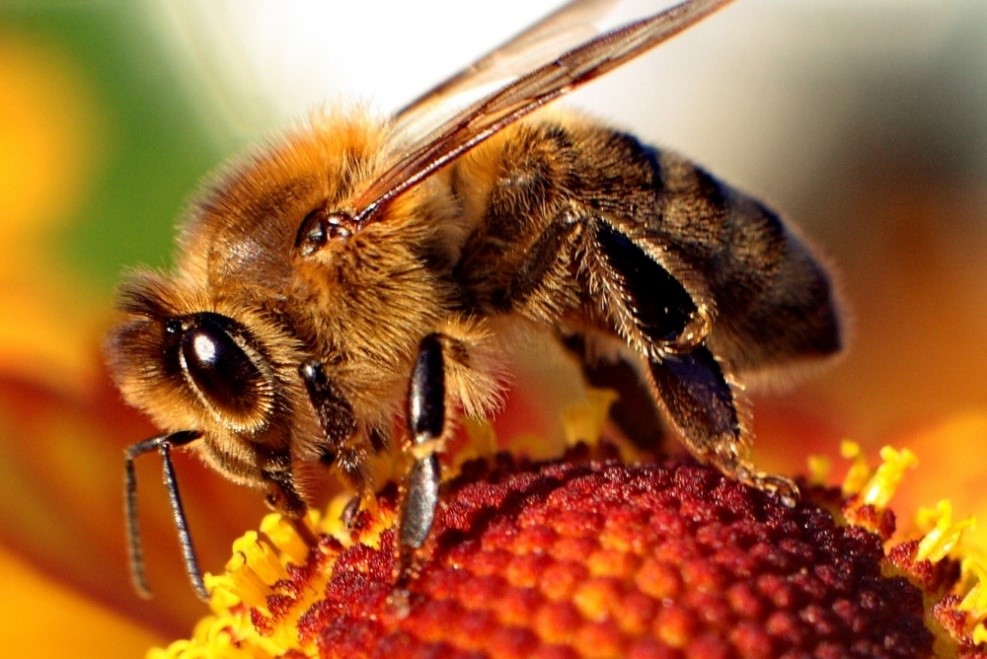 A honey bee (Apis mellifera) visiting a flower on the daily round of pollination (one of many). A tireless job that would make even the most tireless Type A person jealous. (Licensed under the Creative Commons Attribution 3.0 Unported) Source: https://commons.wikimedia.org/wiki/File:Bee-apis.jpg

Most people have had the unpleasant experience of a bee sting at least once in their life. The injection of the bee’s 100 to 150g of venom via the barb penetrates the skin, and can cause a plethora of local and systemic symptoms such as pain, redness, swelling, itching, throbbing, hives, nausea, dizziness, shock, unconsciousness, decreased blood pressure, shortness of breath, and/or anaphylaxis depending on the sting location, allergies, quantity of stings, and breed of bee. Luckily, the symptoms for most are short-lived and easily dealt with, but the bee’s prognosis is usually grimmer. Most bees die after stinging a potential threat as their abdominal organs and muscles are often ripped out as the barb implants itself in the skin. Their life for the protection of the colony.

The multitude of responses caused by bee venom have led to it being heavily researched and analyzed for potential benefits, other than karma for the person who took the last piece of pie on a summer picnic. Some of this research falls under the area of Apitherapy, or bee venom therapy, which is starting to gain grounds as numerous studies are finding beneficial applications in a number of diseases. 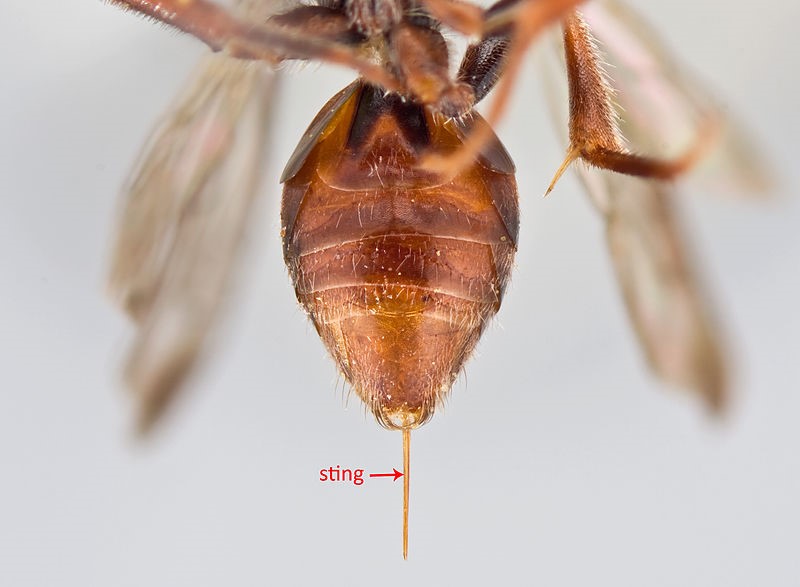 Picture of a honey bee’s stinger, which continually injects venom into the victim upon penetration of the skin by the barb. (Licensed under the Creative Commons Attribution 3.0 Unported) Source: https://commons.wikimedia.org/wiki/File:Sting_Apparatus.jpg

Bee venom, or apitoxin, has been used in Oriental medicine since around the second century BC, but has not received full credibility until recent years. Studies have focused on the anti-inflammatory effects of apitoxin in reducing pain in those with osteoarthritis, cancer, rheumatoid arthritis, cervical disc protrusion, and progressive muscle atrophy  as well as the relief of neuroinflammation associated with many neurodegenerative diseases including Parkinson’s disease and multiple sclerosis. Mellitin, a common anti-inflammatory peptide, has been shown to lower blood pressure, cause histamine and cortisol release, and even has promise as a potential anti-cancer agent, in which researchers modify mellitin to an immunotoxin so that it can destroy cancer cells. Other components of bee venom include pheromones, enzymes, amino acids, and phospholipase A, which destroys cells by breaking up the phospholipid membrane. As a promising area of research, studies are focusing on the optimal dosage and concentration of bee venom that patients should receive depending on their condition, as well as the various diseases apitherapy could be successfully applied to.

In a study by Cho et al. (2012), they aimed to test the effectiveness of bee venom acupuncture (BVA) in treating adults with idiopathic Parkinson’s disease (IPD). BVA involves the injection of dilute bee venom into predetermined acupuncture points. Parkinson’s Disease is the second most common neurodegenerative disorder characterized by the loss of dopaminergic neurons in the substantia nigra. A current therapy is Levodopa, a drug that aims to improve symptoms by increasing basal ganglia dopamine activity. However, after 5 years of usage many patients develop a tolerance and experience motor response complications, hence the need for alternative and complementary treatments for patients. This study involved randomly assigning 43 adults with IPD who were consistently taking antiparkinsonian medication for at least one month to one of three groups: an acupuncture group (n=17), a BVA group (n=18), or a no treatment group (n=14). All participants were assessed by the Unified Parkinson’s Disease Rating Scale (UPDRS), Berg Balance Scale (BBS), Beck Depression Inventory, Parkinson’s Disease Quality of Life Questionnaire, and the number of steps and time it took to walk 30 metres. The BVA and acupuncture groups then underwent stimulation of 10 acupuncture points twice weekly across 8 weeks, and then completed the assessments again. All acupuncture and treatments were conducted by one physician trained in Korean medicine. Cho et al. (2012) found that those in the acupuncture and BVA groups had significant improvements in motor symptoms and UPDRS scores compared to baseline. These patients experienced less tremors, less bradykinesia, increased stability and coordination, and increased performance of motor tasks. The BVA group also had major improvements in the BBS, UPDRS parts two and three, and 30-minute walking time. Of note was that the UPDRS parts two and three scores improved more than those in the control group. No significant difference was found between the BVA and acupuncture groups’ scores indicating relatively equivalent effectiveness. 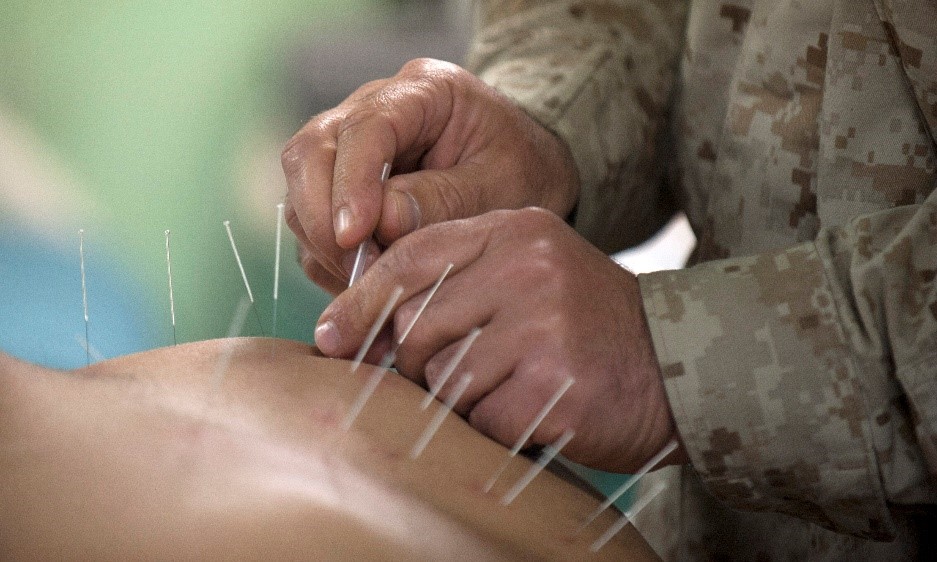 The exact mechanism of acupuncture and BVA on PD’s motor symptoms is unclear but some studies have found a link between 1-methyl-4-phenyl-1,2,3,6-tetrahydropyridine (MPTP), which is a commonly implicated toxin in PD, and the abilities of acupuncture to inhibit microglial activation and inflammation. Acupuncture has also been shown to promote the expression of neurotrophic factor in the brain and its tyrosine kinase B receptor, protect dopaminergic neurons against MPTP toxins, and reduce oxidative stress to dopaminergic neurons that occurs in PD. Thus, acupuncture and BVA could be implemented as a means of neuroprotection to help delay the onset and progression of PD. Cho et al. (2012) also mentioned that acupuncture and BVA could be synergistically combined with levodopa, the standard treatment for PD, to target different proposed mechanisms implicated in PD, potentially improving a patient’s prognosis due to its multimodal approach.

I find research such as the article by Cho et al. (2012) fascinating, as it involves the analysis and manipulation of certain aspects of organisms most would never even consider being beneficially applied to humans. It reminds me of the diversity of ways research can be applied and how researchers are always seeking novel approaches to problems. The natural world is brimming with potential discoveries and promising therapies. Who knows. The next treatment for a major disease could lie in the gene of a sea cucumber or the venom of a honey bee.