A Brief and Slightly Weird History

The use of contraceptive dates back to ancient civilizations of Egypt, Greece, and Rome (1). These early societies practiced a wide variety of contraception methods; however, they viewed contraception as the responsibility of women. Many upper-class Egyptian women used crocodile dung and honey to irrigate the vagina! Unfortunately for them, these are alkaline and promoted sperm motility (2). The appearance of male contraceptives was first seen in Muslims and Jewish writings during the 15th century, which described condoms as veils (3). Prior to the 15th century, many cultures used devices to cover the head of the penis. In China, these were made of oiled silk while in Japan they were made of tortoise shells or animal horns (4)!

The idea that women are responsible for childbearing, conception, birth and even contraceptives has been apparent for centuries and still exists today. However, as civilization progresses, the role of the male in conception and prevention is becoming more apparent. Therefore, there is an elevated need for male-controlled contraceptives.

Currently, men have two options of contraception, either the condom or a vasectomy. Vasectomy became an established form of contraception in the 1950s, and has become the most common procedure, following circumcision, preformed on men. A vasectomy procedure involves a surgical detachment of the vas deferens, thus sealing the vas deferens tube from the testicles and blocking sperm (5). As such, a surgical procedure comes with varying risks such as infection, short-term incisional pain, failed sterilization and chronic pain syndromes (6). Moreover, vasectomy reversals are complicated, expensive and may not always be successful. 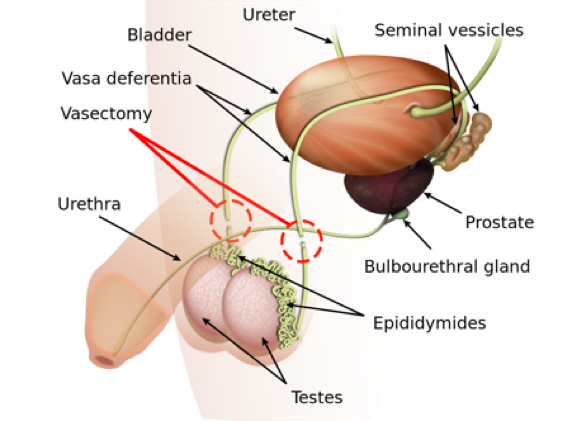 Condoms are a reliable contraceptive, relatively inexpensive, and provides protection against sexually transmitted infections. The largest disadvantage to condoms is its use failure rate. Fact: men hate condoms. They are restrictive, awkward and huge mood killers, like having a class on a Friday night. We need the “pill”!

Observing the success of the female “pill”, it seems obvious that a hormonal approach to developing a male “pill” would also be successful. This pill would use testosterone or an analog to prevent testicular steroidogenesis and ultimately spermatogenesis. So why isn’t there a male birth control? Let’s just say women have it easier, a pill for women only needs to block the release of a single egg once a month, whereas a pill for men faces greater challenges. For example, compared to the one egg that women release a month, men produce 1,500 sperm per second. Stopping such an army is no simple task. Hypothetically, an external source of testosterone would prevent the testes from producing testosterone and ultimately stop sperm generation (7). Unfortunately, the liver breaks down testosterone so rapidly that oral contraceptives would not make a difference (7). Only testosterone injections can suppress pituitary gonadotropins and stop spermatogenesis, however only a few men find weekly injections appealing. Even persistent testosterone levels lead to intratesticular Dihydro Testosterone (DHT), which may actually promote spermatogenesis (7). Recently, the development of selective androgen receptor modulators (SARMs) allow patients to bypass the prostatic side effect of androgens. This development has the potential to translate into an effective pill contraceptive for males (7). 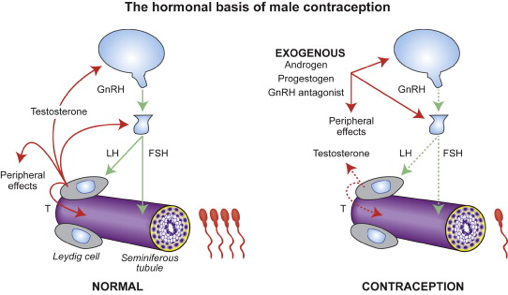 The mechanism by which testosterone inhibits spermatogenesis. Image taken from Chao et. al 2014.

In addition to the conventional hormonal contraception research, there is great interest in non-hormonal contraception methods. These methods are especially promising as they target more specific physiological processes that may lead to less adverse side effects (8). The non-hormonal methods are categorized into those that reduce motility and maturation and those that inhibit spermatogenesis (8).

Adjudin is a substance that disrupts spermatogenesis by interfering with the connections between germ cells and Sertoli cells, resulting in the release of immature sperm (8). Studies in rats produced reversible contraception but also lead to adverse effects, such as muscle atrophy. Moreover, the blood-testis barrier, which divides the seminiferous epithelium of the testis and provides an optimal microenvironment for meiosis I/II, is impermeable to many drugs, including Adjudin. 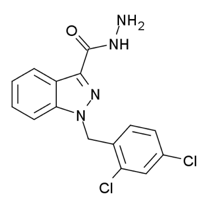 Vitamin-A (retinol) is a group of fat soluble compounds that are essential for various biological functions. The most commonly known function of this compound is vision, in the form of retinal. However, both germ and Sertoli cells also use retinal to synthesize retinoic acid which further regulates gene expression for normal spermatogenesis (9). Blocking retinoic acid syntheses or function has the potential to inhibit spermatogenesis. One such drug is BMS-189453, which is an oral retinoic acid receptor antagonist that causes a failure of spermatid alignment at the lumen for sperm release (9). Studies in mice found complete and reversible infertility, and further experiments aim to increase the specificity of the antagonist to reduce off target binding and for pharmaceutical application (9).

In China, taking warm baths before intercourse was a large form of contraception long before any scientific verification. The position of testes in the scrotum can normally maintain a 3-4oC decrease in temperature relative to body temperature (10). However, an increase of the testicular temperature reduces spermatogenesis due to amplified apoptosis of germ cells (10). That being said, I would not solely rely on a warm bath to prevent a pregnancy!