By now, most of us have heard about the water crisis in Flint, Michigan.  Their drinking water is contaminated with lead, and this was known to public officials in early 2015, yet it was months before residents were informed of the danger.  This horrific betrayal of the public trust has spurred the creation of a new bill to increase public notification, but it will be too little, too late for residents of Flint.  There are a multitude of adverse health effects from exposure to lead, and article after article stated that there is no known safe level. 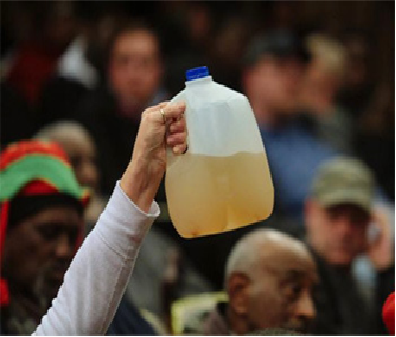 This post intends to focus on the biological aspects of lead contamination, but there is a very political side to the story in Flint.  I personally recommend this article from Cracked.com, the secondary source of this nice picture of Flint’s water, as well as this C-Span video of the hearings of Michigan state officials.  Closer to home, news has broken of lead in the drinking water of some schools in Prince Rupert, and although the levels are higher than Health Canada’s recommendations, the city states that there is no cause for alarm.  This even though a 2012 Report by Health Canada found the current intervention blood lead level (BLL) of 10µg/dL to be inadequate as “there is sufficient evidence that BLLs below 5 µg/dL are associated with adverse health effects”, and the CDC has lowered their intervention level to 5 µg/dL.

So why is lead so dangerous?  By looking at a periodic table we can see it shares many properties with calcium, and it has been found to go anywhere in the body that calcium does.  Lead can pass through the blood brain barrier, it can directly substitute for calcium at active sites of messenger systems, and can be stored in the bones for decades.  The developing brain is particularly vulnerable, and elevated BLLs at this stage can result in potentially irreversible cognitive defects.  The previously linked Health Canada Report has several handy charts listing the different neurodevelopmental effects associated with lead, and the BLLs they’ve been found to occur at.  Evidence has also mounted that lead induced neurotoxicity may be due to the facilitation of apoptosis.  Apoptosis has been found to occur in rod photoreceptors, cerebellar neurons, and the hippocampus, in relation with elevated blood lead levels.  Two of the proposed mechanisms will be discussed here, one involving the accumulation of calcium, and one involving the regulatory proteins Bcl-2 and Bax.

As we learned in class, apoptosis is necessary in the developing organism for the “sculpting of body parts, removal of parts that are no longer needed and for the precise sorting and ordering of cell types and tissues”.  Normally this process is precisely controlled, however the accumulation of lead disrupts calcium homeostasis, leading to an accumulation of calcium in lead exposed cells. 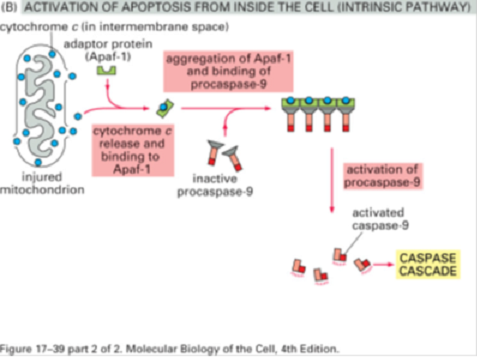 This intracellular increase of Ca2+ stimulates the opening of the mitochondrial transition pore leading to depolarization of the mitochondria, and the release of cytochrome c.  Which, as we learned, is a key step in the intrinsic pathway, and leads to the activation of caspases, and the caspase cascade.  The degree of cell death experienced by this route was found to be both age and dose dependent. 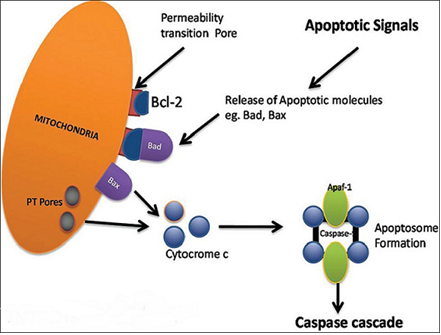 When lead is present, the expression of a protein similar to Bad, Bax, is enhanced.  The activity of Bcl-2 may or may not be enhanced, both have been found to occur.  In either event, the ratio between the two proteins deviates from that required for normal neurological development.  Again, the damage was found to be dose dependent, with no safe level of blood lead.

The damaging effects of lead at even low doses, and its ability to stay in the body for decades after exposure has ceased makes it a very insidious poison.  The degree to which lead negatively affects health is somewhat dependent on nutritional status.  Optimal intake of nutrients such as vitamin C, iron and of course, calcium, can attenuate its effects.  Regrettably, in North America, increased exposure to lead is often correlated with decreasing socioeconomic status, and thus, those most vulnerable to exposure are those who have the least defense against it.