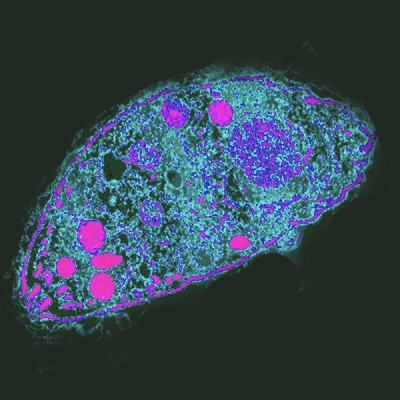 Many of you may have heard of Toxoplasma gondii, a zoonotic parasite present in infected cat feces found to influence the behaviour of some mammals. Many of the media articles reporting this interesting protozoan read, “explaining the crazy cat lady”, as if the cats have taken control of these people, causing them to adopt more cat friends and sacrifice their time and home space using their all-powerful mind controlling symbiosis with T. gondii. While this parasite can be contracted from your cat, it can also be contracted indirectly from undercooked meat, water, organ transplants, or vertical transmission. The parasite produces oocysts in the cat, which are passed in the feces and can sporylate and pass directly to humans or through an intermediate source by ingesting undercooked meat. In the host, they can mature into tachyzoites, a rapidly multiplying stage of T. gondii.

Humans can often become infected without knowing it; however, the infection, also called toxoplasmosis, can cause damage to eyes, brain, and other organs. In less frequent cases, this infection has caused retinochoroiditis, myocarditis, meningoencephalitis, and death. Those who are particularly at risk are immunocompromised individuals. In a normal immune response, the cytokine IL-12 is produced to cause natural killer (NK) and T cells to make the cytokine IFN-ɣ. Dendritic cells, neutrophils, and monocytes are the main producers of IL-12. As this is a common innate response to many infections, an individual who does not have a robust response would have increased susceptibility to pathogens, T. gondii included. The body has been shown to control T. gondii infection in several ways using IFN-ɣ. First, IFN-ɣ has been implicated in nitric oxide production, which inhibits T. gondii replication and enzymatic activity. The immune-related GTPases also promote clearing of T. gondii by removing it from its parasitovorous vacuole which protects it from host factors in the cytoplasm. Lastly, IFN-ɣ increases tryptophan degradation, which decreases T.gondii’s ability to grow, as it is a tryptophan autotroph.

Innate response aside, the ability to mount an adaptive response is also important, as mice lacking T and B cells were particularly susceptible to T. gondii. However, how parasite antigens are presented and recognized by the major histocompatibilty complexes has been unclear, and particularly poor antigen presentation has been shown in T. gondii infected cells. It is suggested that phagocytosis or invasion by the parasite might allow for presentation. In addition, humoural immunity through IgM, IgA, IgE, and IgG2 has been implicated in T. gondii infection, where lack of B cells allowed a normal IFN-ɣ response but eventually hosts became highly susceptible. 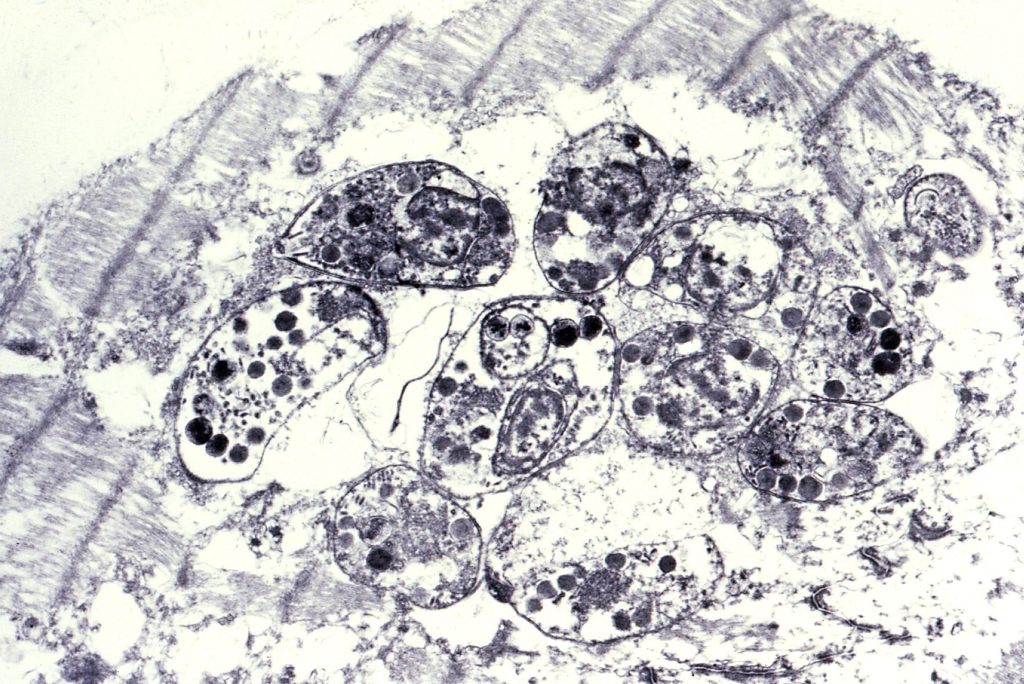 Tachyzoites in a myocyte, by Dr. Martin D. Hicklin (CC0)

If your cat has this parasite, or the neighbour cat visited your garden for a bathroom stop, you could be exposed, and the parasite may evade your bodies many attempts to combat infection. Rats, who have a programmed aversion to cat odour, no longer avoid the odour when infected by T. gondii, decreasing their perception of being preyed upon and improving the cats chance of a snack. But what is the human risk? If our immune systems lose, are our cats controlling our minds in ways similar to this perceptual manipulation feat?

Some research has explored the connection of T. gondii to psychiatric disorders. Having an affected mother, sibling, being an immigrant from certain countries, being born and living in an urban area, having an older father, and cannabis use were all indicated as risk factors for both T. gondii infection and schizophrenia, which have a high prevalence of comorbidity. This parasite has also been linked to suicide attempts, personality traits, and decreased cognition, as well as bipolar disorder type I.

Now before you kick your furry friend out, read on. While cats carry the parasite, cat ownership does not appear to increase your chances of having psychotic experiences. Also, in a study of 78 owned cats in Italy indicated that only 20% of feces contained the parasite, so your cat may not even have it. However, these infections are still a large burden on the health care systems in places like the Netherlands and South America, and are a particular risk to pregnant women. Because the effects of acute infection can be so fatal, especially in young children or embryos and immunocompromised individuals, some European countries test all pregnant women for the parasite. As such, education regarding this parasite is valuable! 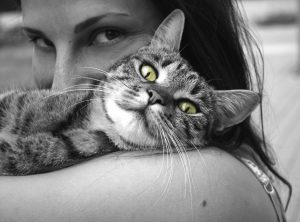 The CDC states that you can prevent contracting T. gondii by cooking meat thoroughly, washing fruits and vegetables, food safe practices in the kitchen, and wearing gloves while working with soil. For your cat, ensure you change the litter box daily, and know that feeding them raw food can be a risk for contracting T. gondii. If you are pregnant or immunocompromised, avoid doing this, or take care by wearing gloves and taking precautions when changing the litter box. However, for the time being, it does not appear that your cat is using this parasite to control your mind, they are only a step in the T. gondii’s life cycle. Although, if your cat could make you their slave, they probably would, or are desperately trying already.

This work by Ali Thomlinson is licensed under a Creative Commons CC-BY Attribution 4.0 International License.