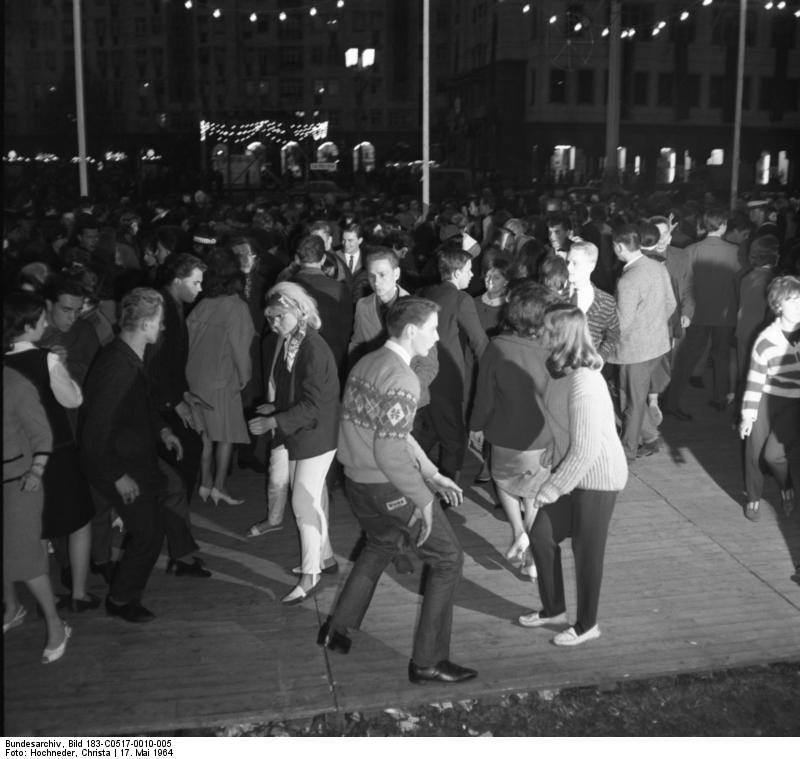 I’m sure that there are many people of a certain age group who remember actually going out and dancing the Twist. However, the only experience I, and likely most of the other posters on this blog, have had with it was in elementary or high school PE class. We learned not only the Twist but also the Hustle, Hand Jiving, the Electric Slide and probably a few others to which the exact steps have long been forgotten. Those were the good old days…

But our cells haven’t stopped doing the Twist. In fact, they’ve been doing it since long before Chubby Checker popularized the dance in 1960!

Why? To cut right to the chase – twisting in molecular biology terminology equates to chirality. Chirality is, of course, an important property of biomolecules and in April 2015 a group of researchers, Tee et al, published their findings that the cell may actually rely on the chirality of actin fibres in order to distinguish right from left (original paper). The ability to do this is essential in the developing embryo so that tissues, organs, structures, and the overall organism develop properly.

If the actin in your cells didn’t love this old 60s dance, you probably wouldn’t be here. Or maybe if you were lucky you’d just end up with two left feet, but that would make any kind of dance pretty hard!

ACTIN, THE TWIST, AND DEVELOPMENT

Actin is a small protein that polymerizes with itself to form long chains known as actin filaments or fibres which have a helical structure that can be left or right handed, similar to DNA. Actin fibres, in turn, are essential building blocks for the structural system of the cell, the cytoskeleton. The cytoskeleton is intricately designed and meticulously laid out with many specialized proteins and exact positioning. However, the complexities of the cytoskeleton’s organization are beyond the scope of this post so here we will simply talk about the actin fibres that appear to be most implicit in determing cell chirality, according to Tee et al. Actin networks are self-organizing, their components have implicit asymmetry and are present in all cell types. Therefore, they are an excellent place to look for insights on cell development.

In their experiments, Tee et al observed that there were two types of actin fibres playing the main roles in left/right determination; they termed these fibres radial fibres (RFs) and transverese fibres (TFs). RFs closely resemble dorsal stress fibres in actual migrating cells during development and are rich in the actin-crosslinking protein α-actinin-1  while lacking myosin II. TFs, on the other hand, are rich in myosin II but contain less α-actinin-1 than RFs. They correspond with transverse arcs in the migrating cell. As will soon be discussed further, α-actinin-1 can be a major factor in left/right determination.

TFs and RFs may differ in their composition and positioning in the cytoskeleton but they interact closely with one another to form an actin network. The authors, Tee et al, observed the development of this network and noted five distinct patterns that the actin would organize itself into: circular, radial, chiral, chordal and linear. The actin achieves these patterns by “swirling”, and swirling usually occurs in a counter clockwise direction. This innate asymmetry is the distinction between left and right for the cell!

However, the direction of swirling can be changed. In cells with a high level of α-actinin-1 swirling actually occurs in the opposite, clockwise, direction. It is fair to say that α-actinin-1 regulates the swirl direction, but the end result is still the same. The cell remains chirally asymmetric and effectively able to distinguish left from right.

The work of Tee et al is somewhat of a breakthrough as previously the only known mechanisms by which the cell could determine left and right involved other cells. Yoshiba and Hamada, Courtelis et al and Blum et al have developed a wealth of knowledge about those mechanisms, but thanks to Tee et al it is now known that the cell has a built-in left/right directional system.

This is a video compiled by Tee et al that shows just how actin does the Twist!

So in conclusion, cellular chirality (i.e. distinction between left and right) is established by the innate asymmetry of actin fibers in the self-assembling cytoskeleton. This ability to distinguish left from right is important for many cellular processes but especially for cellular movement during embryonic development. If our actin fibres weren’t doing the Twist, we most certainly would not exist as we know ourselves today.

And on a final note, if anyone is interested in learning the Twist (perhaps for your next night out?), here are complete step-by-step directions!