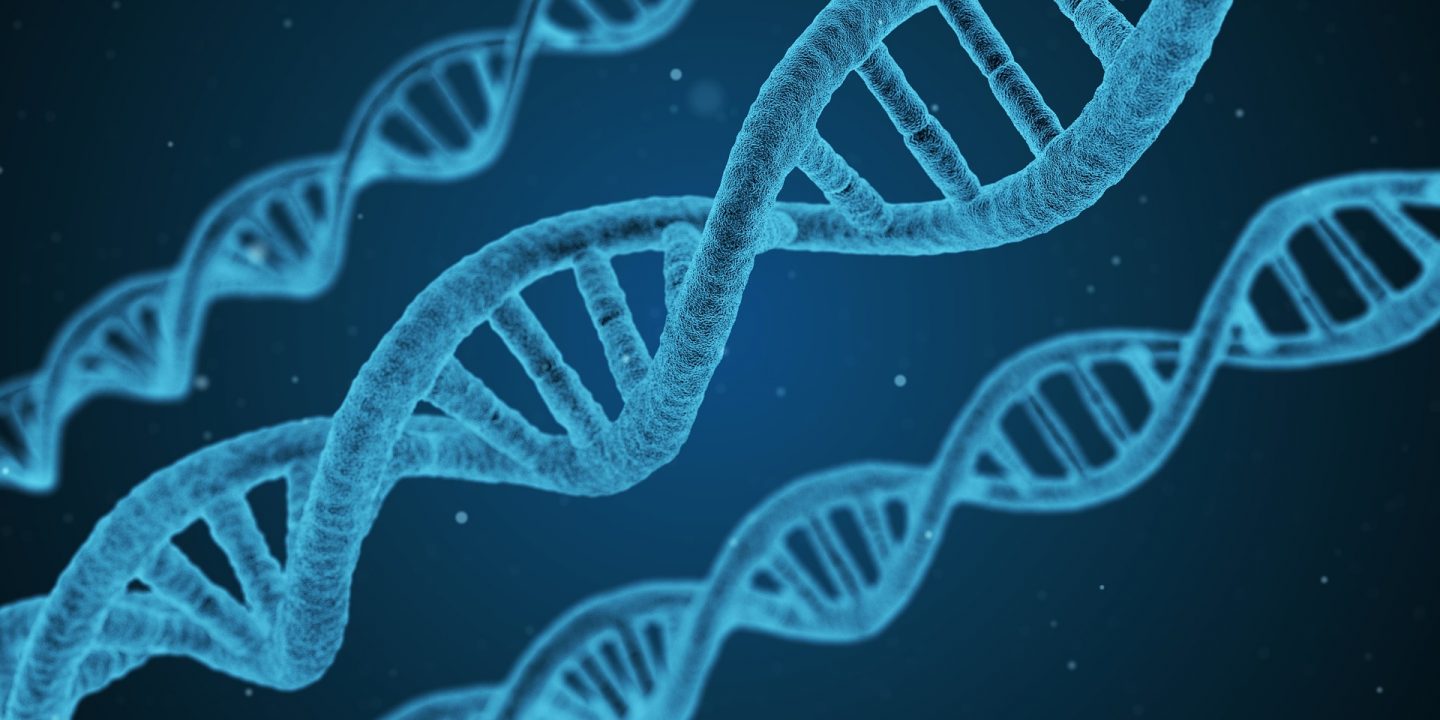 CRISPR stands for Clustered Regularly Interspaced Short Palindromic Repeats and it is being widely used today for new advancements in gene therapy. CRISPR-Cas9 works by removing part of a genome and replacing it with a different sequence or silencing that given sequence. Since the genome is basically the instructions for creating a living organism, theoretically this technology could be used to modify any living entity. CRISPR also has the potential to cure any genetic disorder or disease by simply cutting out the gene(s) that codes for it and replacing it with a normal non-mutated gene. This technology has the potential to cure diseases, design babies, and modify anything with a genome. CRISPR has the power to transform life as we know it.

The Cas-9 endonuclease is a four-component system that includes two RNA molecules; CRISPR RNA (crRNA) and trans-activating CRISPR RNA (tracrRNA). Cas-9 was re-engineered so that the two molecules can be fused together into a single-guide RNA, that when combined with Cas-9 can cut DNA that was specifically targeted by the guide RNA. Changing the sequence of crRNA allows CRISPR to target any given DNA sequence.

When a bacterium detects viral DNA, it produces two types of short RNA. One of them has the sequence that matches the viral DNA. These two RNA’s form a complex with Cas-9. When the guide sequence matches up with the viral sequence, Cas-9 cuts the target DNA which destabilizes the virus. CRISPR doesn’t always have to act on viruses. This same mechanism can be used to cut out any given segment of any DNA and replace it with a specific sequence. The Cas-9 also remembers the viral DNA sequence so that it can be easily cut again if it is ever introduced again. 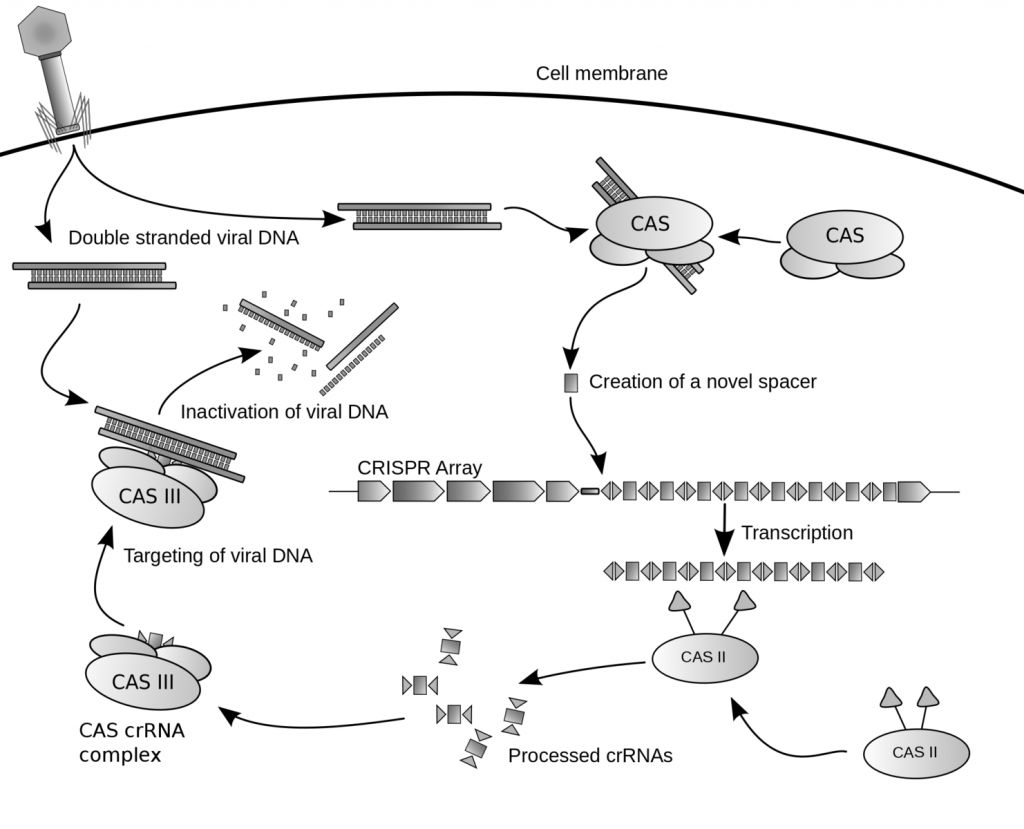 Diseases could be cured by modifying the gene that encodes for it either by silencing it or by replacing it with a normal gene. Gene silencing can be carried out using CRISPR. After Cas-9 cuts a segment of DNA, the cell tries to repair it but errors occur leading to mutations that disable the gene effectively silencing it. This can allow researchers to understand the function of that gene. These mutations are random though, and sometimes researchers want to be more precise. This can be carried out by replacing a mutagenic gene with a healthy one by adding another piece of DNA with the required sequence. This can be done in culture or in a fertilized egg which would allow transgenic animals with targeted mutations. Certain gene targeting is not identifiable when working with many animals at once. A gene that encodes for fluorescence in jellyfish has been used as a marker to identify which animals are transgenic. This was applied to pigs and their nose fluoresces when under a UV light. The unaffected pigs do not fluoresce. CRISPR can also be used to target more than one gene at once. This is very useful because some expressed traits require more than one mutation and CRISPR allows scientists to study them at the same time.

Mosquitos are very good at spreading disease. CRISPR Cas-9 has been used in mosquitos in different ways to prevent this spread. If a mosquito has too many proteins, it dies. Researchers used this to their advantage by introducing a gene that produces a protein to many mosquitos. These mosquitos were then released into the wild where they bred with other mosquitos. Their larvae express this gene and die before reaching the adult stage. With this application, CRISPR Cas-9 could be used to “fight fire with fire.”

The obvious implication of the CRISPR Cas-9 technology is the potential it possesses. Theoretically CRISPR can allow people to change their pre-existing genome into something healthier, stronger, and simply better in every way. The fact that it can be introduced in vitro means that you can design your own child. This could delete inherited diseases and traits that the parents don’t want their kid to have. This is a complication because eventually the perfect human would exist and leave very little diversity in the world. Another complication is the money. Only people in the upper class of society would initially have access to this technology due to the cost. This could create an even bigger imbalance between the classes than there already is which could have devastating effects in the world. The less likely implication is the theory that mankind could evolve into some kind of super human race. Theoretically your genome could be modified by CRISPR Cas-9 to make you taller, faster, jump higher, etc.

In a way humans have already been using this technology for hundreds of years in selective breeding. Although the mechanism at the molecular level wasn’t quite understood, the overall concept was still there. Foods and animals were being selectively bred/modified to fit the needs of humans. The same idea is being carried out through the action of CRISPR. Any abnormalities can be changed to our liking. Diseases can be wiped out, abnormalities can be fixed, and babies can be modified to your liking. CRISPR Cas-9 has the potential for perfection.

This work by Regan Young is licensed under a Creative Commons CC-BY Attribution 4.0 International License.