For many people the common fruit fly, Drosophila melanogaster, proves to be quite a nuisance. However, they must not have ever taken a biology course to understand how useful these fruit-loving buddies of ours have been in medical and genetic research. As we all know, from obviously paying attention in class, D. melanogaster has a very quick life cycle and can produce hundreds of offspring, making them ideal lab subjects. Their life cycles basically just include birth, reproduction, and death. In fact, reproduction is so important to them that male fruit flies that are rejected by females drink 4 times more alcohol than a male who has mated!

However, scientists probably did not choose these guys as the gateway to human gene research because of their need to consume excessive amounts of alcohol when facing rejection, but it just goes to show as to why they are such good advocates for human gene research.

It’s more likely that they are used in comparison to humans because 75% of genes that cause diseases in humans are also found in D. melanogaster. Furthermore, fruit flies have a ton of genes. Whereas humans have 24,000 genes, fruit flies have 14,000 genes which is crazy to think about considering their size difference. 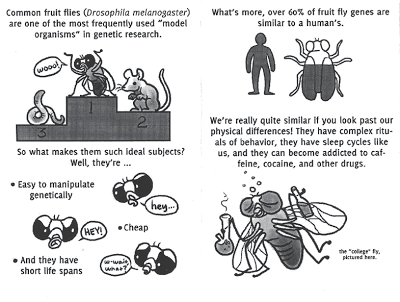 Figure 2. Some reasons as to why Drosophila is used in genetic research. Image Credit: Andrew S. Yang CC-by-NC-ND

Now scientists definitely had fun when naming these genes…

“What’s in a (gene) name?”, you may ask. Well, unlike in humans, where the gene names are complicated and boring to learn; D. melanogaster has very interesting gene names that makes them easy to remember which is brilliant since they’re the ‘poster child for genetics‘.

Therefore, welcome to the best literature didactic you’ll ever receive on analogies… right in the genes of Drosophila melanogaster.

I don’t mean to take you back to your high school English classes, but if you’ve heard of William Shakespeare, you’re probably familiar with Hamlet as well. Let’s be honest, it’s kind of a given if you managed to graduate from high school. Even if for some reason you don’t know about Shakespeare’s longest play, there’s still a good chance that you’ve heard the quote, “To be, or not to be”. Although D. melanogaster cannot recite the soliloquy as well as Prince Hamlet did, it still abides by it simply because of its morphology. Hamlet, a gene in D. melanogaster, is a binary genetic switch between two different dendritic morphological types. Dendritic neurons determine the number and kind of sensory input that the fruit fly can receive. In the peripheral nervous system, the external sensory (ES) neurons are comprised of a single nonbranched dendrite. On the other hand, the linearly related multidendritic (MD) neurons have branched dendrites. Hamlet is only expressed in the ES neurons and therefore a mutant can change the fate of an ES neuron into an MD neuron. As Hamlet would say, “To be D. melanogaster with one single branched dendrite or not to be… that is the question”.

Ever play with Ken and Barbie dolls as a kid? Did you ever notice something off… something different in regards to human anatomy? Well, if you haven’t yet keyed into what I’m hinting at, the Ken and Barbie gene in D. melanogaster will switch on the imaginary light bulb above your head. Mutations in this gene affect the fly’s genitalia development, leading to a lack of external genitalia just like Ken and Barbie. This, as the name suggests, affects both males and females. Mutations in the Ken and Barbie locus cause their genitalia to remain inside the body. Homozygous flies have it even worse because they may have the disadvantage of missing portions of genitalia and analia. However, lucky for them, if a scientist ever feels like being a hero they can fully rehabilitate any defects in the locus with the expression of a wild-type genomic construct.

When one thinks of clowns, they probably think about scary movies, carnivals, McDonalds, or the recent clown epidemic in the USA, rather than fruit flies (unless they’re a fruit fly nerd). D. melanogaster has a gene named clown because of the classic red and white color that appears in its eyes due to a mutation that leads to altered neuronal differentiation patterns. Clown encodes parts of the epidermal growth factor (EGF) receptor pathway. Mutant clown increases the number of pigment cells which is likely caused by incorrect differentiation or impaired apoptosis.

I’m not dead yet

The Fountain of Youth has been something humans have been talking about for quite a while. How do we stay young? Immortal, even? Well you’ll be shocked to know that some D. melanogaster have already found their Fountain of Youth through a mutation in I’m not dead yet (Indy). Yeup, that’s the real gene name. Indy is a protein coding gene that transports citric acid cycle intermediates. However, mutations in Indy extend their life span by creating a favorable metabolic state that is similar to calorie restriction. #goals. 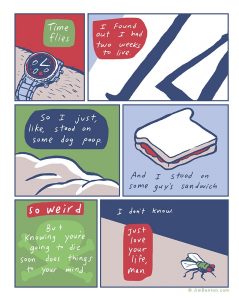 Before I let you completely forget about English literature, how much do you know about the Wizard of Oz? Yes, I just hit you with another play, but at least it’s a different author! There’s loads of interesting characters like Dorothy, Wizard, Scarecrow, the Cowardly Lion, the Tin Man and even the Wicked Witch. However, D. melanogaster seems to have taken a liking to the Tin Man as it too has no choice but to accept its fate. D. melanogaster has a gene that works to develop its heart and dorsal vascular musculature. Unfortunately, a mutation in this gene causes D. melanogaster to essentially have no heart at all. Thus, it’s only suitable that it be named tinman.

Looks like I’ve run out of time but if you’re ever really bored or just interested, I highly recommend looking into some more of their entertaining gene names such as dreadlocks and cheap date.

Basically, Drosophila melanogaster is quite useful in genetic studies, making it one fly guy .