By Evan-Amos (Own work) [CC0], via Wikimedia Commons

How does peanut allergy work? 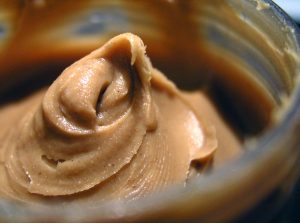 Peanut butter is very tasty, but for some people it can cause all sorts of trouble.
By PiccoloNamek at English Wikipedia, CC BY-SA 3.0, https://commons.wikimedia.org/w/index.php?curid=515664

All food allergies, including peanut allergy, are considered to be a type I hypersensitivity. Type I hypersensitivities involve immunoglobulin E (IgE). Peanut allergies start at the gut. When you eat a peanut, the peanut proteins get taken up by epithelial M cells in the intestine, and passed on to dendritic cells. The proteins are cut into smaller fragments and taken to T helper cells to activate them. Activated T helper cells make cytokines, molecules that stimulate B cells to make IgE specific to peanut proteins. IgE then bind themselves to mast cells and basophils, and when they meet the peanut proteins again, order the cells to release histamine and other molecules to elicit an allergic reaction. There are 8 allergen proteins in peanuts, and the main ones are Ara h 1 and Ara h 2.

Symptoms of allergic reactions to peanuts fall into 3 main categories: skin, respiratory, and gastrointestinal symptoms. In skin, symptoms include hives, swelling, redness, and itchiness. Symptom that affect the respiratory system include coughing, wheezing, voice changes, and congestion. In terms of gastrointestinal symptoms, this can include vomiting, abdominal pain, and diarrhoea. Almost all reactions involve symptoms showing in the skin, while symptoms in the respiratory system and gastrointestinal system occur about half and one-third of the time, respectively. Severe allergic reactions can result in anaphylaxis, which involves difficulties in breathing, a drop in blood pressure, and, in very serious cases, loss of consciousness and even death. A secondary allergic reaction can happen up to 4 hours after the initial reaction. So a person can seemingly get better, then suddenly have another allergic response. Scary!

There are currently no drugs in use that treat peanut allergies. Most treatments involve treating symptoms of the allergic reaction itself. For more serious reactions, an epinephrine injection (think EpiPen) is needed, followed by treatment at the hospital and monitoring to make sure a secondary reaction doesn’t happen. For more mild reactions, usually taking antihistamines orally is enough to treat the symptoms. 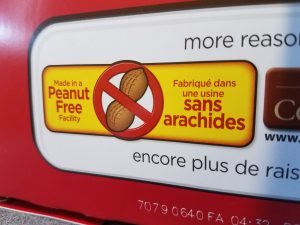 For those with peanut allergies, even a tiny bit can cause a reaction. Labels like these can help avoid exposure.
By: Cindy Ng

Back in the late 1990’s and early 2000’s, doctors recommended that peanuts and other common allergy causing foods be eliminated from the diet of infants that were at a high risk for food allergy. However, studies showed that this method failed to prevent food allergy by avoiding contact in infancy. So in 2008, doctors stopped recommending using this method to prevent peanut and other food allergies.

Recently, Aimmune Therapeutics released a press release about their phase 3 clinical trial of their drug AR101. AR101 uses a method called oral immunotherapy (OIT). OIT involves giving patients increasing amounts of allergens. This is done in hopes that eventually the patient will be desensitized to the allergen. AR101 itself is made from roasted peanut flour, and is given to patients in capsule form to be mixed in their food. In the clinical trial, called PALISADE, a total of 496 children from ages 4 – 17 were given either treatment or a placebo for one year. At the beginning of the trial, most couldn’t tolerate more than 30mg of peanut protein. During this time, 20.4% of the children given the treatment and 6.5% of the children given placebo dropped from the trial for various reasons, including adverse events. At the end of the trial, 96.3% of people treated with AR101 could tolerate 300mg of peanut protein, compared to 8.6% with placebo. 84.5% of the AR101 patients tolerated up to 600mg of peanut protein, about 2 peanuts worth, compared to 4.3% of the placebo group. Aimmune plans to submit an application for FDA approval by the end of the year.

Although AR101 may not work for everyone, it is still a promising method for the treatment of peanut allergy. Even increasing tolerance up to 1000mg can help avoid many cases of allergic reactions from food contamination. With the success of AR101, maybe other food allergies can also be treated using OIT.

This work by Cindy Ng is licensed under a Creative Commons CC-BY Attribution 4.0 International License.