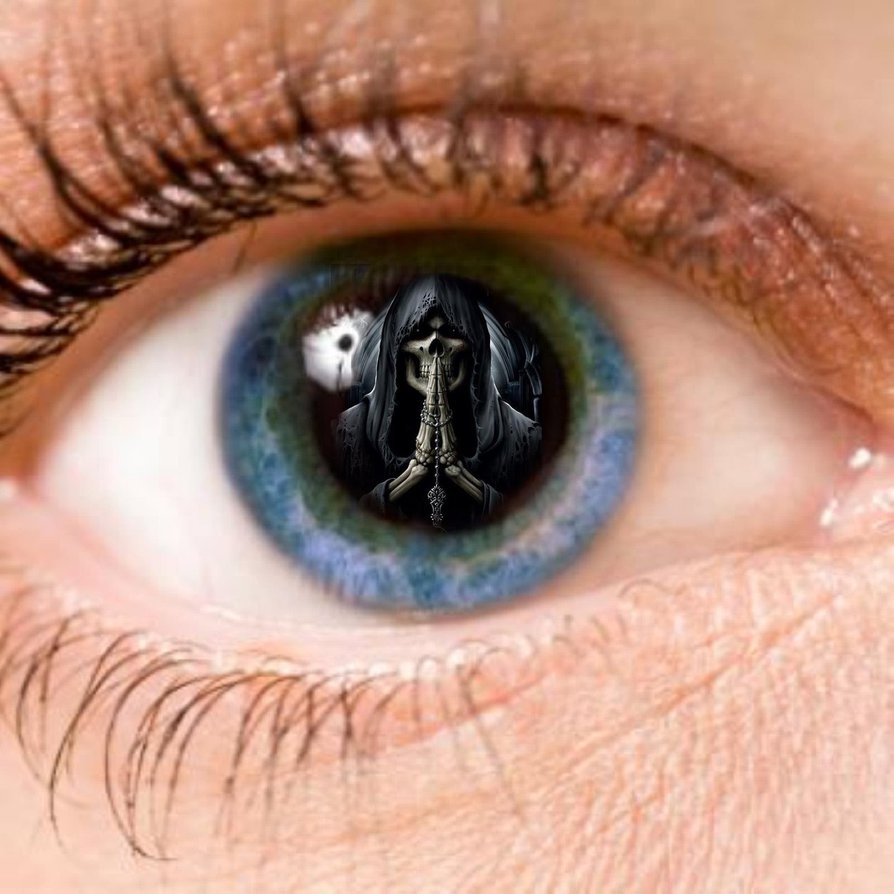 Staring Death In the Eye: Controlled Apoptosis of Lens Cells

It happens from the minute we wake up to the time we go to sleep. No, I’m not talking about the interminable stress of university, but rather, sight! Whether it’s looking at the sunset on the beaches of Maui or staring at the D+ you got on your last midterm, we use our vision to help us experience the world around us. While most of us take it for granted, vision is an extremely complex process mediated by two sense organs called the eyes. The eye is comprised of three layers: the outer layer, middle layer, and the inner layer. The outer layer of the eye includes the sclera and cornea; the middle includes the choroid, ciliary body, and iris; while the inner layer consists of the retina. When light hits an object, it is reflected off the object and into our eyes where it travels into the pupil (the opening in the middle of the eye) and through the lens. The lens is a transparent structure that bends light to focus images on the retina at the back of the eye. The retina contains photoreceptive cells which work to convert the incoming light to an electrical signal which is sent to the brain, ultimately allowing us to respond to our environment.

A diagram showing the structures of the eye and the pathway light follows into the eye (Bupa and Professor Simon Taylor).

What’s truly fascinating about the eye is one of the specific structures involved- the lens. The lens is made up of two cell lines. The cells along the outermost edges of the lens are called lens epithelial cells. These cells differentiate to form the inner lens fiber cells which remain present throughout an organism’s lifetime.

A diagram of the mammalian lens. Outer lens epithelial cells differentiate through an apoptotic-like pathway to produce the inner fiber cells, which make up a majority of the structure (Yan, Q., Perdue, N., Blake, D., & Sage, E. H. (2005)).

Additionally, these cells are transparent. To be transparent, a cell must be evacuated of essential components such as organelles and DNA, yet remain a sustained structure; this is rare to find in nature. Through the differentiation process, the organelles, proteins, and DNA of the fiber cells are destroyed so the cytoplasm contains only one type of protein, oriented in the same direction, called crystalline proteins. To use an analogy, it’s similar to being committed to living off  chicken nuggets for the rest of your life. Imagine emptying your fridge of everything except chicken nuggets- the only source of food for the remainder of your life. Although this doesn’t sound like too bad of an idea to me, it wouldn’t be sustainable in reality. Our bodies need vitamins and nutrients from other food groups (vegetables, dairy products, grains) that aren’t contained in chicken nuggets. So, if we can’t survive off only one food, how is it that the lens fiber cells can survive with only one protein? It turns out, the lens cells uses this homogeneity of composition and arrangement to their advantage. This cellular organization is essential in directing light through the eye to avoid scattering.

A visual representation of your fridge after committing to a lifetime of chicken nuggets (Creative Commons 3.0).

So, you might be wondering how the fiber cells destroy all their contents without destroying themselves. The mechanism isn’t completely understood by scientists but is thought to follow a path of “modified apoptosis” called denucleation. To understand denucleation, we should first talk about apoptosis.

Apoptosis is commonly referred to as “cell suicide” and is used by the body to get rid of diseased or abnormal cells, maintain tissues, and aid in the development of body structures. There are two main pathways of apoptosis- the extrinsic apoptosis pathway and the intrinsic apoptosis pathway- both of which lead to cell death. In this article, we will focus primarily on the intrinsic apoptosis pathway. This pathway relies on damage to cellular mitochondria which causes a protein called cytochrome c to be released from the mitochondrial intermembrane space. Once in the cytoplasm, cytochrome c binds to a procaspase activating adaptor protein called Apaf1. Apaf1 proteins aggregate in the cytoplasm, recruiting procaspase molecules to aggregate. This aggregation of procaspases holds them in such close proximity that their residual activity can be summed to a threshold high enough to activate one another to become caspases. These caspases can then activate other caspases in the caspase cascade, ultimately resulting in cell death. 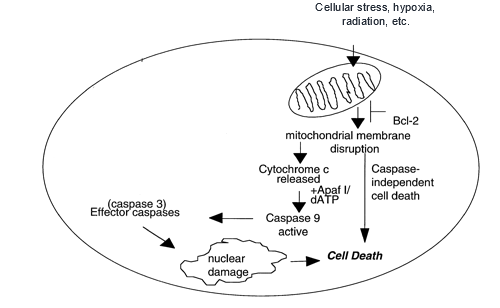 As the lens epithelial cells begin to differentiate, new layers of fiber cells form around already existing ones. This causes the pre-existing fiber cells to move further away from the surface of the lens, decreasing their exposure to oxygen. The cellular mitochondria depend on oxygen for their function in respiration, thus decreased exposure results in damage to the mitochondria. This initiates a pathway that is very similar to the intrinsic apoptotic pathway as it uses common regulators at signalling steps such as caspases. This process differs from normal apoptosis, however, in a major way. Normal apoptosis involves cell death and the cells are then phagocytosed by neighboring cells. In denucleation, however, the apoptotic pathway results in destruction of the nucleus and organelles, but the process halts itself before complete destruction, leaving an intact cell full of crystalline proteins. In this way, lens cells are capable of using a controlled apoptotic pathway.

Why are scientists so interested in this controlled apoptotic pathway?

As you might expect, this phenomenon of controlled apoptosis intrigues many researchers, and for good reason. They propose that, with further research, this mechanism may be utilized as treatment for neurodegenerative diseases such as Parkinson’s and Alzheimer’s which are characterized by excessive cellular suicide. Determining how lens cells are able to stop the apoptotic pathway before total destruction occurs could yield insight to scientists on how to prevent these diseases from causing neural degradation in humans.

Donut or Death? (Sugar in Apoptosis and Cellular Proliferation)

Save your lungs, save your life.