Safety from Zika in South America

Intro
South America… With the promise of ruins, culture, and natural wonders, it is a popular destination on backpackers bucket lists. For decades, it has delighted travelers with mountains, rainforests, deserts, salt flats and enchanting festivals. Now many countries in South America have been infested by the Zika virus epidemic. In April 2015, the virus broke out in Brazil and quickly spread to neighboring countries in South America (Figure 1). In 2015, the epidemic affected over 50, 000 people in Brazil, and over 20, 000 in Columbia. I will be traveling to South America this coming summer. Like many backpackers, I am worried about contracting the Zika virus and the possible link to microcephaly. 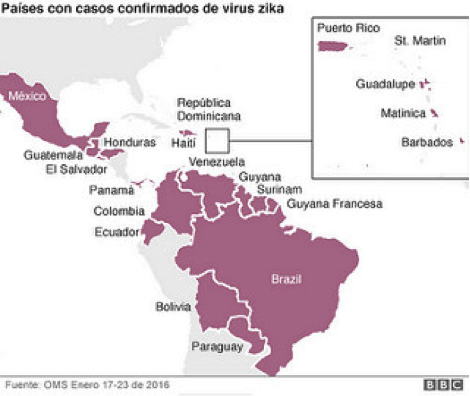 Figure 1. Areas experiencing an outbreak of the Zika virus.
https://www.flickr.com/photos/runmx/24758935296/in/photolist-DHS1SL-CEjGNf-D5jGuv-Dgsy3e-DEFWfy-CVJTmR-DUqCh5-DHPhiF-D9ZNJx-DR9weB-CEBbUn-Bg1BgL-D9BxC5-DLx849-DBqy7h-D9q8T5-DKFVbU-DcUQ57-DA7bqn-DKqbd4-DfHBhk-DtCGTK-Dn4tQ3-CSdhYb-Dyo8Hq-CTu6Fn-DRCTFZ-DhoGrz-DQSRya-DEsPdy-CPnuof-DfXLHr-DHCMC5-DQSRTi-DLHkX8-DLKzwj-AK9oe6-CZ65jq-DUQBvh-CCuMGK-D8QgEH-DLayga-DBAqHj-BMU5VN-DidCfo-CQWRxg-Dy57zd-Dqb3J9-BByLDW-ovdgMP

The Zika Virus
The virus is spread through mosquitos from the Aedes family. Infection leads to the formation of rashes, fever, joint/muscle pain, and inflammation of the eyes (conjunctivitis). The symptoms are relatively mild: only 20% of people infected show symptoms, symptoms rarely require hospitalization, and very rarely do people with the virus die Despite these mild consequences, there are a few reasons for concern:

Microcephaly
This is a condition where babies are born with smaller then normal heads and brain defects. At birth, babies with microcephaly have a head circumference of less then 32cm and are often still born or die shortly after birth (Figure 2). The disease has been known to causes seizures, facial deformities and lead to problems in speech, learning, vision and motor function. Therefore, if the child survives, he/she suffers from mental disabilities, and delays in development.

Microcephaly is a congenital disease, which means that the defect is present prior to birth. The disease arises from a gene mutation, which disables the brain and scull from properly maturing during fetal development. Mutations on any one of seven genes (most commonly on the ASPM gene) have been shown to lead to microcephaly. Evidence shows that the proteins made by these genes are important cell division regulators that are required for proper brain development. The lack of regulation results in infants having smaller brains, smaller sculls, and brains containing fewer then normal neurons. In addition, the presence of multiple centrosomes has been shown to be associated with microcephaly. The presence of too many centrosomes can lead to the stalling of mitosis and induction of apoptosis though the caspase cascade. This increase in apoptosis has been shown to lead to a decrease in neural cell production and reduced brain cells seen in microcephaly.

Conclusion
In the past, the Zika virus has not been a focus for scientific inquiry. Therefore, the long-term effects and mechanisms of infection are unknown. Despite this concern, for non-pregnant women there is currently no reason to avoid travel to areas experiencing the Zika Virus epidemic. It certainly won’t stop me.