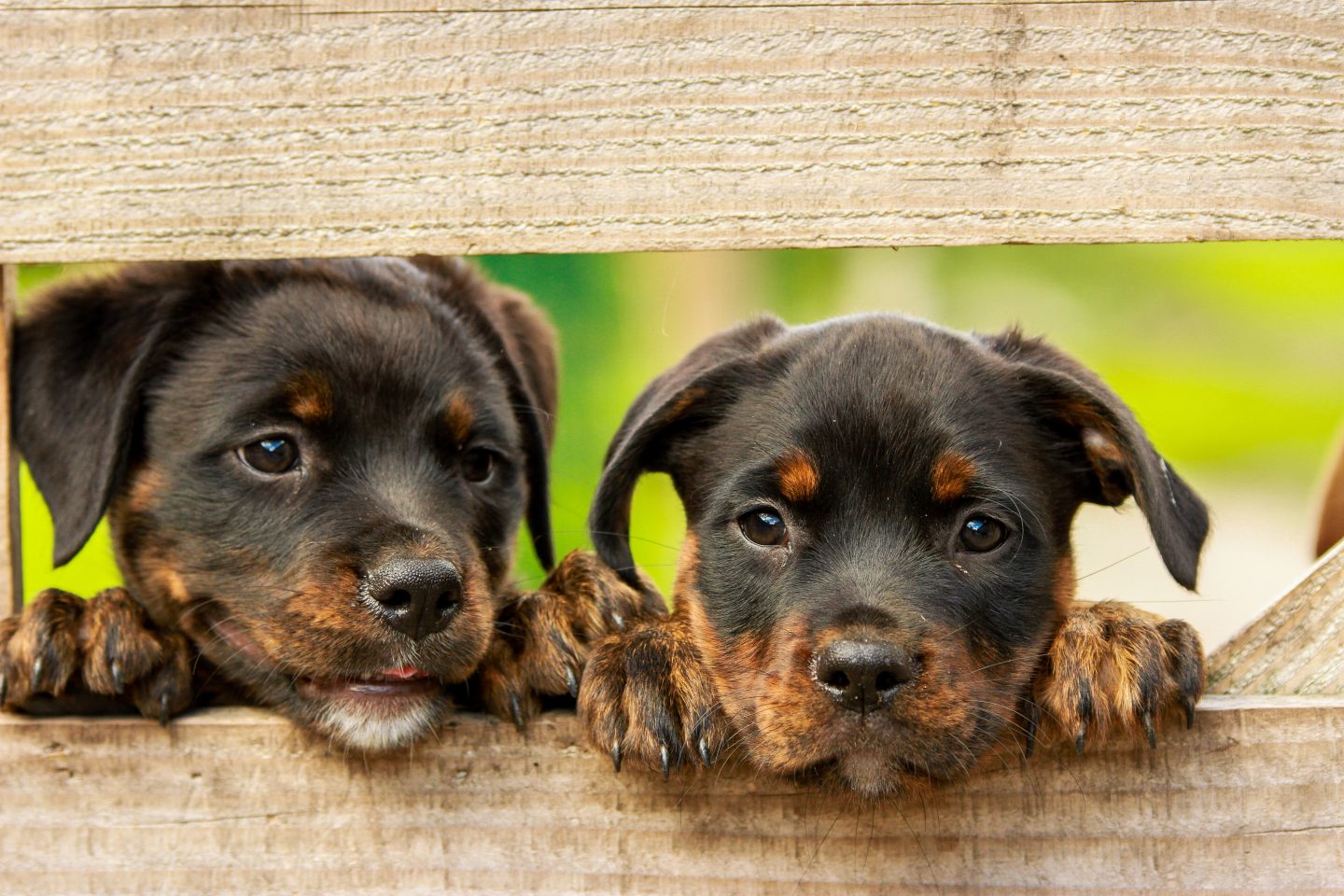 Hay is for Horses, Not Dogs! The Curious Case of Canine Allergies

Sniffling nose, itchy eyes, rashes – we can probably all recognize these as symptoms of hay-fever, an allergic reaction to pollen. But did you know man’s best friend, your fluffy canine companion, could also be suffering from not only hay-fever, but food allergies and even severe anaphylactic hypersensitivities? It’s true, and the root causes of these reactions are surprisingly similar to our own allergic reactions. 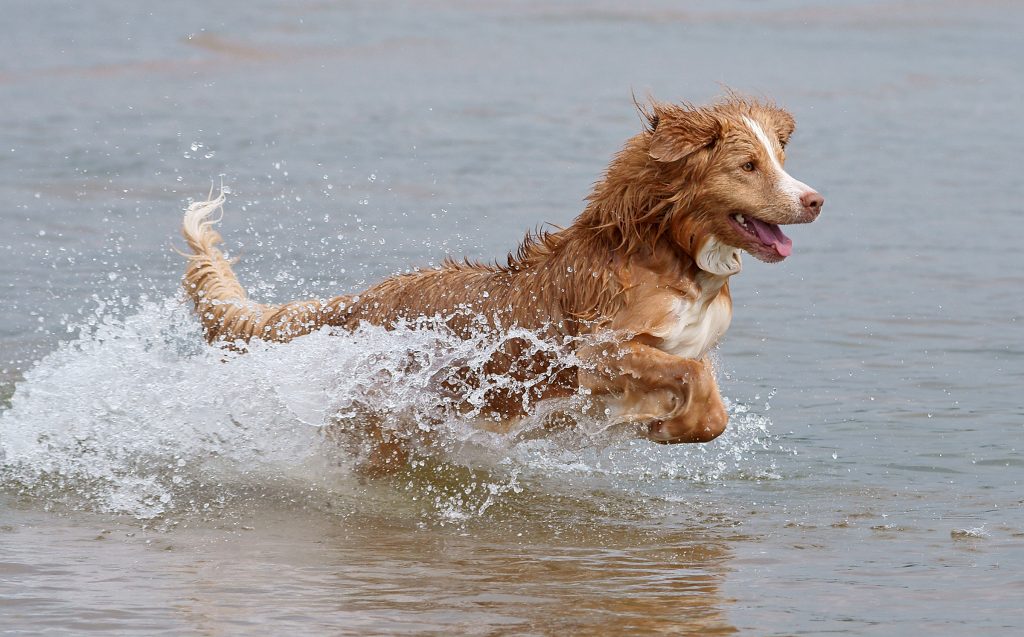 The immune system is generally very good at distinguishing friend from foe, in a healthy animal the immune system knows not to attack cells that are part of its “self” or harmless foreign cells such as food particles, and to attack foreign, dangerous cells and particles. However, in the case of allergies the immune system, instead of recognizing pollen, wheat, or dust as harmless foreign bodies, they are perceived as a threat. In both humans and dogs, this overreaction is generally caused by immunoglobulin E (IgE). Immunoglobulins are the immune cells responsible for recognizing foreign cells and initiating the immune response to attack these foreign cells. IgEs are specific to one type of foreign cell, so each antigen (foreign cell surface protein) has their own IgE to recognize it. This is normal immune function, but if there are elevated IgE levels, allergies can develop. Once IgE recognizes an antigen, it marks the foreign body and interacts with other cell types to mount an immune response. One important cell that the IgE communicates with is the mast cell. This cell is the “Costco” of the immune system, it is full of a little bit of everything, proteins called enzymes that break down cell components, and signalling molecules to activate other cells to digest the foreign bodies. IgE will bind to the mast cells after binding an antigen to initiate the immune response, and can remain bound to the mast cell for months, which keeps the body primed for further reactions to allergens. 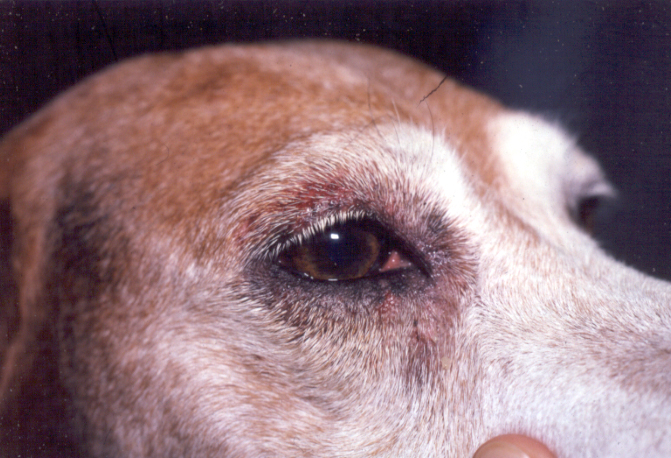 Dog with dermatitis surrounding the eye, the skin is raw from rubbing and scratching the itchy area. CC BY-SA 3.0, Author: Carol Foil

This is the general mechanism of allergies in humans, and in dogs it is similar in some ways. Most canine allergies are mediated by IgE, but there are some curious differences in dog reactions from human reactions. In the case of pollen allergies, we typically think of sneezing, sniffles, a runny nose, itchy eyes, and maybe rashes or hives. Although these symptoms are all possible in dog reactions, pollen and food allergies typically present as dermatitis, an inflammation and irritation (rash) of the skin that can range in severity. The dermatitis can also present as conjunctivitis, meaning it affects the membranes of the eyes, mouth and airways, causing swelling and discomfort. Like humans, these reactions are caused by an increase in IgE specific to the allergen, but there are some important differences in the immune response, and some aspects of the reactions are still not fully understood. 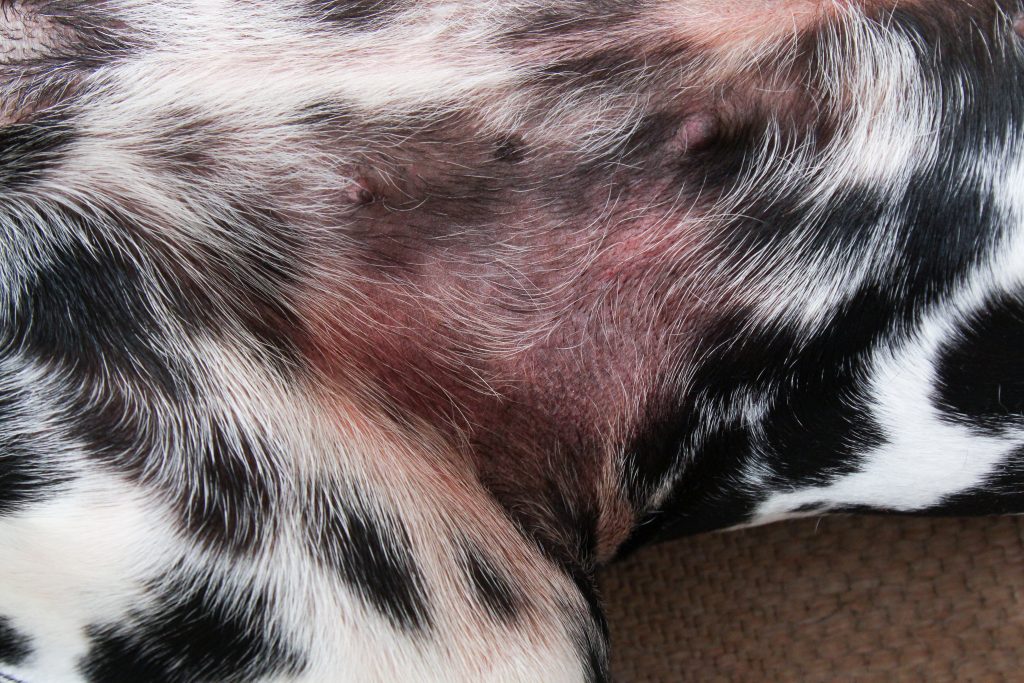 A dog with atopic dermatitis on its stomach, near the hip joint. This is a common area to see the effects of dermatitis as the rubbing of the skin caused by normal walking further irritates the skin.

IgE is certainly the instigator of canine allergies, like human allergies, but the levels of IgE in different cell types is not consistent in dogs with or without allergies. In allergic dermatitis, caused by either food or pollen allergies, dermal cells have an increased level of attached allergen-specific IgEs, as do blood cells but IgE does not increase in the blood plasma. This is unusual, as many healthy dogs present with very high blood plasma concentrations of IgE, which is hereditary and common in inbred dogs, but does not indicate an increased risk of developing allergies, and low concentrations in the blood does not indicate a lower risk of allergies. This is in direct contrast with human allergies, in which blood plasma IgE is generally very well correlated with cell-bound IgE. This has made allergy testing for dogs difficult and allergies are generally identified by elimination diets in the case of food allergies, and by skin tests (injecting allergens just below the skin) for pollen and other environmental allergies. The elimination diets are long and depend on observation of a reaction, and the skin tests require anesthesia, which is expensive and not always feasible in dogs with other health problems, such as heart murmurs. For this reason, work has been done to test for antigen-specific IgEs in the dog’s blood stream during diets or exposure to environmental allergens, but because of the complicated and unclear relationship between IgE levels and allergic reactions, it is difficult to produce an accurate test for allergies. 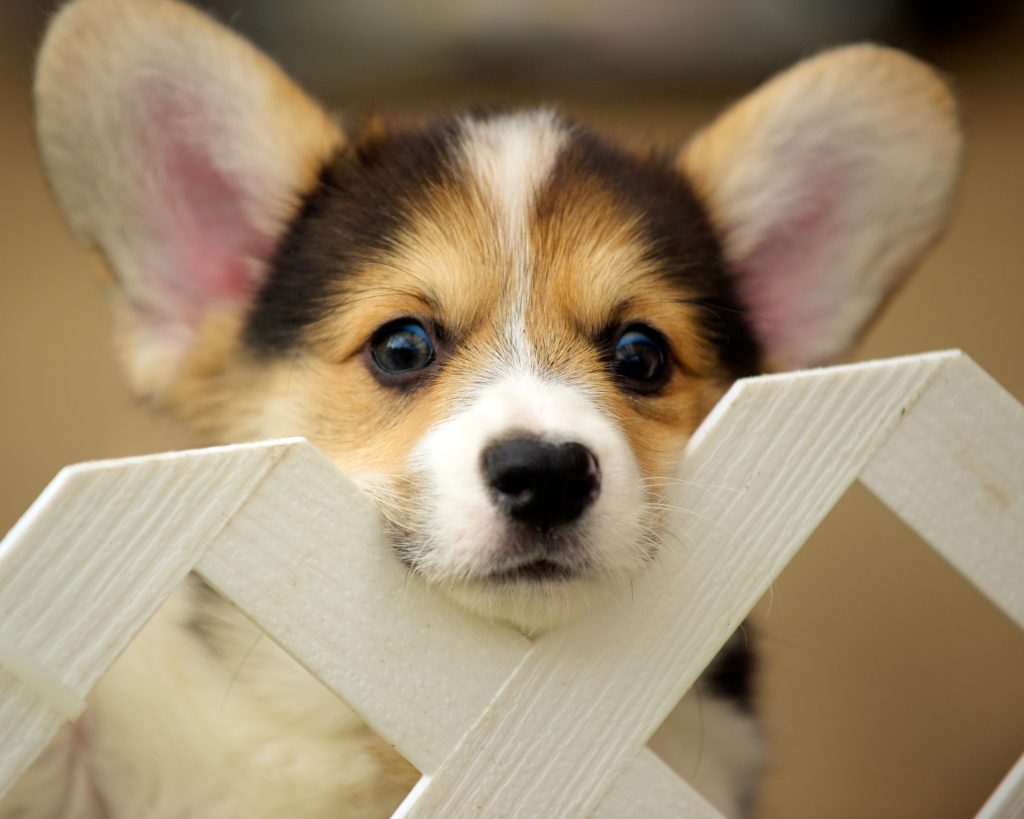 Despite these complications, the treatment and outlook for dogs suffering from allergies is generally very good. Treatments, such as administration of antihistamines and immunotherapy, both of which are also used in treating human allergies, with varying success, are commonly used for dogs as well. Although antigen-specific immunotherapy (ASIT) has shown mixed results in humans, it has been shown to be effective in a majority of canine cases. ASIT is a therapy whose purpose is to desensitize the individual to the allergen to which they react. This is accomplished by scheduled injections of diluted antigens, starting with a low dose and increasing the dose with decreases in reactivity to the previous dose to prevent future reactions. The rational for this is that the more the immune system is exposed to and flooded with the allergen, the less it will react because this level of allergen becomes “normal,” sort of like how humans get used to wearing clothes soon after being introduced to them as babies, we become desensitized.

Overall, even though a lot of the mechanisms of canine allergies are complicated and not well understood, we have surprisingly good treatment options for dogs with allergies, even better than treatments for humans. So if your dog has allergic dermatitis, don’t fret, your furry friend will be just fine.

This work by Nicole de Blois is licensed under a Creative Commons CC-BY Attribution 4.0 International License.

Uveal Melanoma: A Terrifying Threat to Your Vision and Potentially Your Life