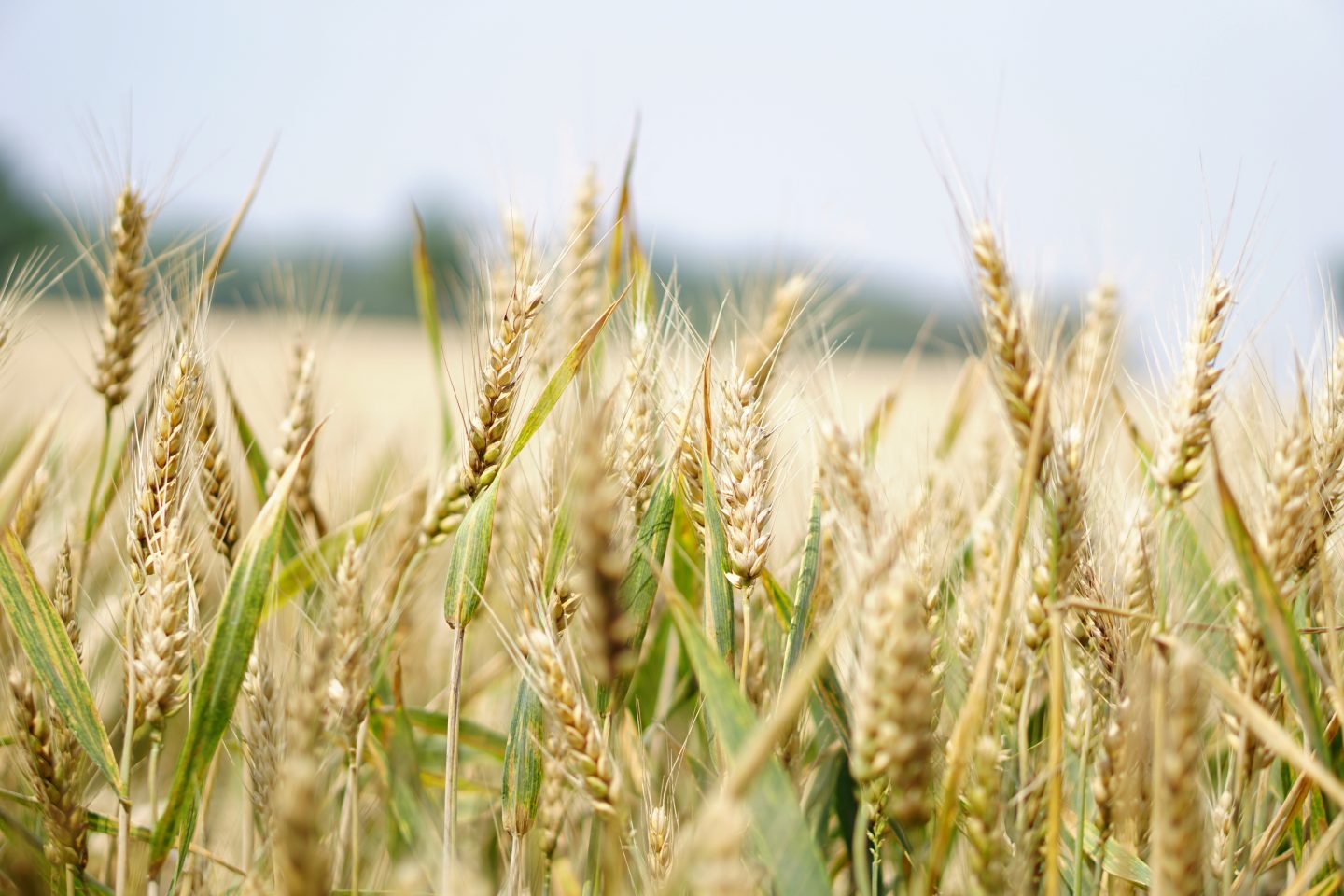 A gluten-free diet is a choice for many, but for individuals with celiac disease (CD) it could mean the difference between life and death.

A surprising observation was made during World War II: due to the bread shortage, fewer people were dying of CD. This lead to the conclusion that a gluten-free diet could help reduce the adverse effects of this disorder. Since this discovery, gluten-free diets have been the primary method of treatment for people with CD. Unfortunately, this is more of a lifestyle change than a treatment option, and it can lead to social isolation and lower nutrient variety when it is not handled appropriately. For these reasons, other treatment options are being researched.

One treatment avenue is the use of stem cells (cells with the ability to regenerate themselves or become any type of differentiated cell) to mend damaged intestinal tissue – this concept will be explored in this blog post. 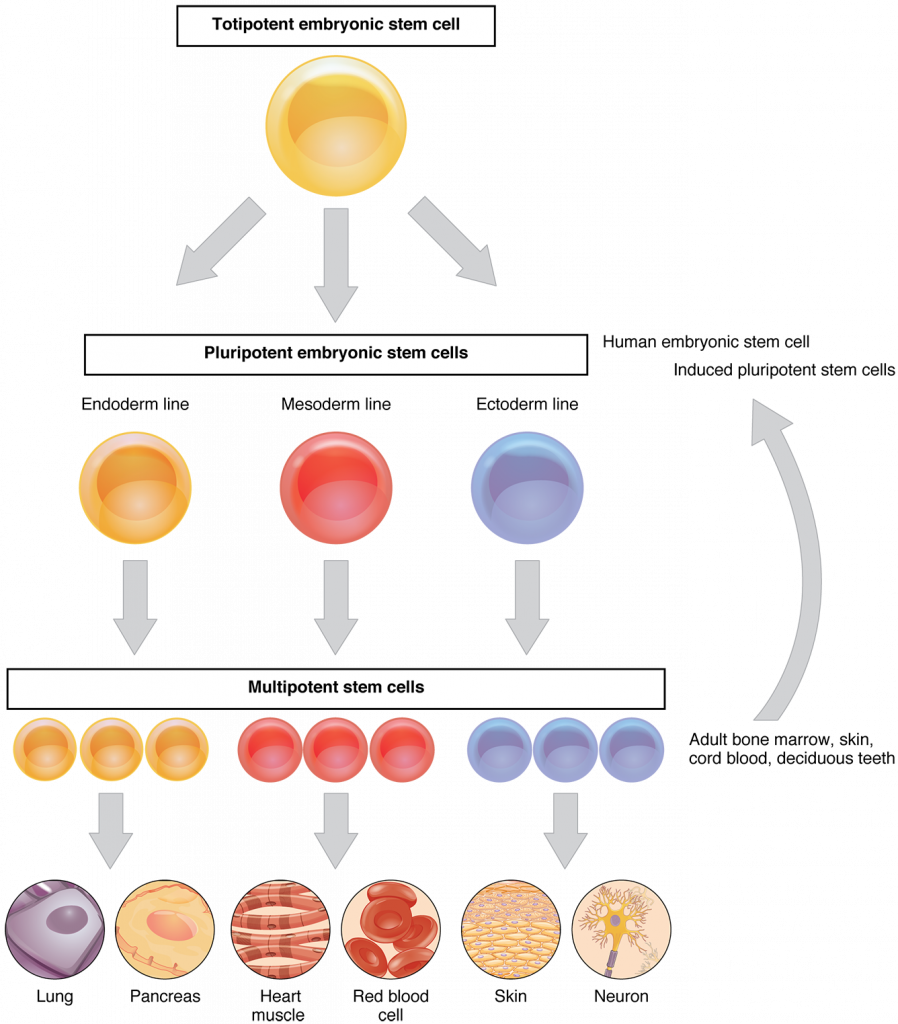 If you answered all of the above (f), you are correct!

Celiac disease results in asymptomatic to symptomatic clinical manifestations. In serious cases, diarrhea, weight loss, nutrient deficiencies, vitamin deficiencies, and villous atrophy can result. To appreciate the potential stem cells have for treating celiac disease, it is important to be familiar with the mechanisms behind intestinal regeneration.

a sad and abused intestine

The intestine is subjected to harsh mechanical and chemical conditions, so epithelial cells of the gastrointestinal tract are replaced every 3-5 days.

About 5-15 stem cells reside in the crypt base of the intestine and drive the process of epithelial renewal. Approximately 300 new cells are generated daily in each crypt. Stem cells give rise to another type of cell, called transit amplifying cells, that move towards the tip of the intestinal villus. Another type of cell, called the paneth cell, is also found in the crypt. These cells move down into the crypt and secrete defensins, liposomes, and phospholipase. 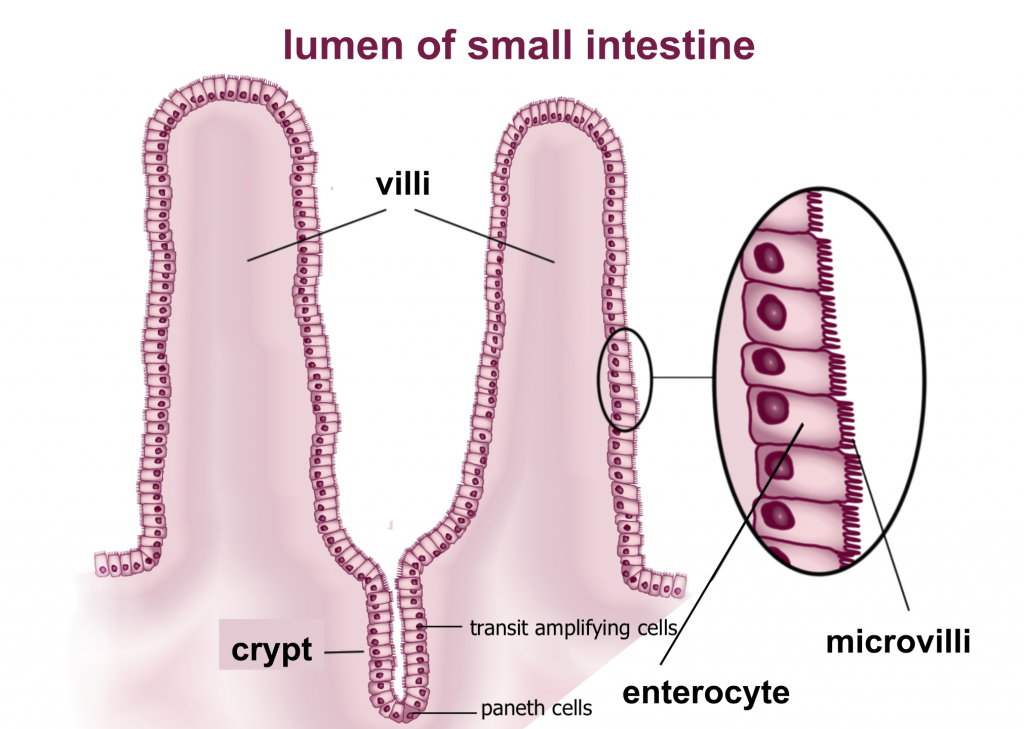 To diagnose celiac disease an endoscopy (using an instrument to look at internal parts of the body) and biopsy (examination of tissue removed from the body) is performed. Almost all CD patients develop immunoglobulin IgA antibodies to the enzyme tissue transglutaminase 2.

It is estimated that over 30 genes that play roles in the inflammatory and immune response are responsible for CD predispositions.

Gluten is a protein composed of gliadins & glutenins which are in wheat. Gluten plays a pivotal role in the cascade of events that lead to the symptoms presented by patients with CD.

Stem cell biology has lead to the emergence of regenerative medicine (a field of medical research in engineering and production of human cells to the point of natural function). With respect to intestinal regeneration, stem cell therapy has great appeal because it targets multiple pathways that contribute to CD and can reverse intestinal damage caused by gluten.

It has been found that within one week of adopting a gluten-free diet, individuals with celiac disease had increased circulation of hematopoietic stem cells – stem cells that give rise to blood cells. Additionally, these cells help with mucosal healing in the intestine. These cells originate from bone marrow, which suggests that bone marrow stem cells are a viable source for intestinal regeneration. Another treatment option is the use of mesenchymal stem cells, which are multipotent stromal cells that can be isolated from fat tissue, fetal tissue, muscle connective tissue, the placenta and the umbilical cord. Mesenchymal stem cells lack immunogenicity, making them easier to transplant than hematopoietic stem cells. In both cases, the use of stem cells helps to rebuild the damaged epithelial barrier.

Stem cells will help rebuild the epithelial barrier, but why is this important?

The epithelial barrier of the gastrointestinal tract is selectively permeable (it controls what is absorbed into the body and what is not). Tight junctions in the epithelial layer help maintain the selective permeability, and mesenchymal stem cells maintain this by acting at tight junctions as well as other places in the epithelial layer. Mesenchymal cells can aid in the excretion of hepatocyte growth factors and vascular endothelial growth factors – this inhibits a pathway that leads to enterocyte apoptosis which eventually leads to villous atrophy in celiac disease.

Mesenchymal stem cells can do more than rebuild the epithelial barrier

Mesenchymal cells can increase tolerance and reduce inflammation seen in celiac disease – this is done by impairing monocyte differentiation into dendritic cells by keeping cells in the G0 phase (a state where the cell is not dividing) and surprising antigen presentation.

Intestinal cells produce the Immunoglobulin A – a hallmark of effects CD, however mesenchymal stem cells can interfere with B cell proliferation leading to impaired ability to produce immunoglobulin.

The mechanisms of celiac disease are complex, but stem cell treatment is one of the many options that could be used alone or in conjunction with other measures to minimize the negative effects of celiac disease.

However, while we wait for stem cell technology to progress here are some great gluten-free recipes:

This work by Kian Draper is licensed under a Creative Commons CC-BY Attribution 4.0 International License.