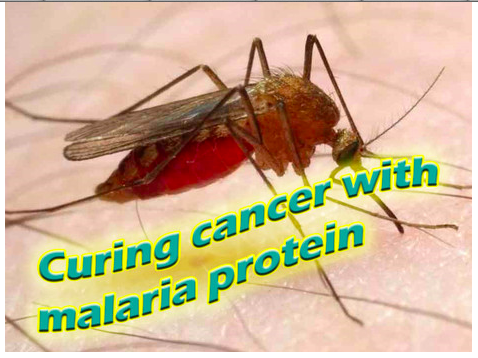 Taken from : Wulffson R., M.D. (2015) Malaria protein might be developed for a Cancer Cure. http://www.examiner.com/article/malaria-protein-might-be-developed-for-a-cancer-cure

Cancer, as known to many, has been the most studied and probably the most popular disease of all time. According to World Health Organization (WHO), lung, prostate, stomach, colorectal and liver cancer are the most common types of cancer in men while breast, lung, uterine cervix, colorectal and stomach cancer are the most common among women. It is estimated by WHO that atleast 100 types of cancer exist which requires unique diagnosis and treatment and that cancer contributes to 13% of all deaths worldwide. Over the next two decades it is expected that there is a possibility of 70% increase in new cases of cancer (1). As such, there is a race for pharmaceutical companies to develop the most efficient drugs that can provide a cure for cancer. Also, researchers continue to find ways in stopping the disease which includes finding the causes of each particular type of cancer, ways of diagnosis, and possible cures. Just recently, a group of researchers/scientists may have accidentally found an effective weapon to target the disease. The group of scientists are facing a possible breakthrough in the continuous fight against cancer, which may lead to the development of a medical treatment for the disease.

Danish scientists from the University of British Columbia (UBC) and University of Copenhagen are in a hunt for an effective weapon, specifically a vaccine, to target malaria in pregnant weapon. Malaria in pregnant women causes huge problems as it attacks the placenta. Unexpectedly, at the same time, the researchers found that the “BAD” malaria proteins could possibly kill cancer (2).

Upon the discovery, the Danish researchers worked with cancer researcher Mads Daugard from UBC and malaria researcher Professor Ali Salanti from University of Copenhagen. Through working together, they found that the carbohydrate malaria parasite associates itself in the placenta of pregnant women is identical to a carbohydrate found in cancer cells (3).

In their published journal article, the scientists engineer Plasmodium falciparum (causative agent of malaria) and infected it to erythrocytes to generate the mighty malaria protein, VAR2CSA. VAR2CSA binds to a specific chondroitin sulfate (“the carbohydrate”) which is specifically expressed in the placenta. Chondroitin sulfate is a sulfated glycosaminoglycan which is usually attached to proteins, as a proteoglycan. The scientists showed that the same chondroitin sulfate modification is present in malignant cells and it can be specifically targeted by recombinant VAR2CSA( rVAR2). In tumors, placental like chondroitin sulfate chains are associated with a number of cancer-associated proteoglycans such as CSPG4 (melanoma associated chondroitin sulfate proteoglycan) and CD44 (cell surface glycoprotein). The recombinant VAR2 protein localizes to tumors and when combined to diphtheria toxin or hemiasterilin compounds, it strongly inhibits in vivo cell growth of tumors and metastasis (4). In a more general term, the combination of malaria protein and toxin looks out for cancer cells. They then gets absorbed by the cancer cells, the toxin is released inside and the cancer cells die (3).

This combination of the malaria protein and toxin was tested in mice with cancer and with cell cultures. The mechanism for cancer eradication described above have been witnessed in the experiments. The findings showed that the malaria protein was able to target more than 90% of tumors effectively. This combination has been tested with mice which were implanted with three types of human tumors: non-Hodgkin’s lymphoma, prostate cancer and metastatic bone cancer. With non-Hodgkin’s lymphoma, the tumor was reduced to about a quarter of the size compared to the control group. In prostate cancer, the tumor was eradicated in 2 out of 6 mice a month after the first dose was given, while in bone cancer, five out of six of the mice were alive after eight weeks of treatment compared to the control group(3). With these findings, the scientists behind the discovery stated that chondroitin sulfate makes sure that the placenta grows quickly. In the same meaning, the carbohydrate serves a similar function in tumors. As a result, the malaria parasite associates itself to the cancerous cells in the same way, which means that it can kill them off (2). 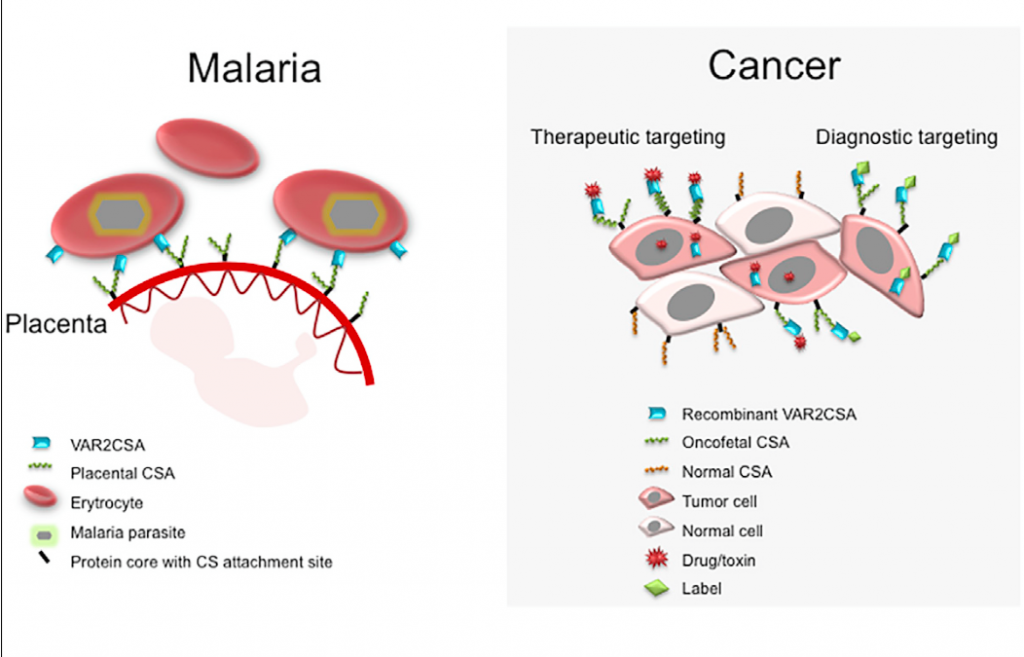 The scientists behind the discovery are now collaborating with the University of Copenhagen. A research team are now working with Ali Salanti and Mads Daugard to push the discovery towards being able to conduct clinic trials on humans. In addition, the University of Copenhagen has created a biotechnology company, VAR2 pharmaceuticals which aims to move forward to a clinical development . Possible clinical trials were expected to be hopefully occurring in four years time (3).

However, The Big Question remains

With all the potentials of the malaria protein in combination with the diphtheria toxin and the experiments conducted on mice, the big question remains as to whether it will work on humans. Or, whether the human body can actually tolerate the doses and will not develop side effects. Despite of these possible drawbacks, the researchers are hopeful. Based on the results of their study, the VAR2CSA protein seems to attach itself only to the particular carbohydrate chondroitin sulfate on the tumor cell with no significant associations to other tissues (4).

Who would have thought that a public enemy like malaria who does more harm most of the time, may actually do good to people. According to WHO, malaria is most prevalent in Africa, and most deaths and cases are heavily concentrated in Africa. But, maybe the next time we hear the word malaria, we might be looking at it in a different perspective.