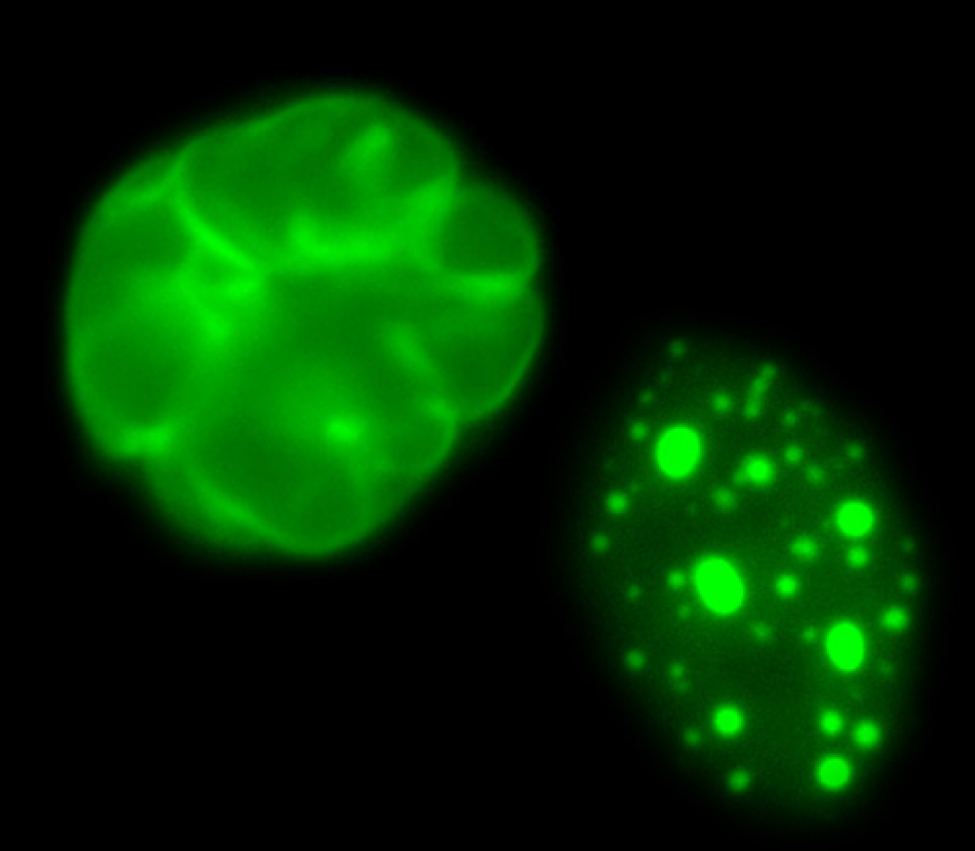 An untreated nucleus from an HGPS affected cell, compared to a similar nucleus after treatment with a farnesyltransferase inhibitor. Image Credit: Capell BC, CC0 Public Domain

A Case of Benjamin Button: The role of p53 in Hutchinson-Gilford Progeria Syndrome

The Curious Case of Benjamin Button, a 2008 movie starring Brad Pitt, follows the story of a man who ages backwards.  The plot, supposedly inspired by Progeria, sparked interest in both popular culture and the medical community.  That being said, this is not the only reference to a premature aging disorder in popular culture.  Progeria has been alluded to in the media for decades; making appearances in Charles Dicken’s Bleak House and even an episode of Star: Trek Voyager! But what exactly is the science behind progeria?

Hutchinson-Gilford Progeria Syndrome (HGPS) is an extremely rare premature aging disorder that currently affects approximately 350 children world-wide. This syndrome is characterized by the prevalence of classical aging hallmarks at a young age which include lack of subcutaneous fat, hair loss, cardiovascular disease, and death due to heart attacks and strokes in children.

HGPS is caused by a point mutation in the LMNA gene.  This gene codes for the lamin A and lamin C proteins. The HGPS mutation creates a mutated isoform of lamin A, referred to as the progerin protein. Progerin has a cryptic splice site, rather than a critical cleavage site. This mutated protein associates with the nuclear membrane, interfering with normal lamina function and triggering dramatic changes in nuclear morphology. This prevents the movement of lamin proteins in the nucleus of affected cells, creating a thicker and stiffer lamina. In addition to this, HGPS patients have a notable alteration in their chromatin structure and epigenetic markers. When coupled with the thickened lamina, DNA repair kinetics are slowed in affected cells, as a result of reduced recruitment of DNA damage response factors. 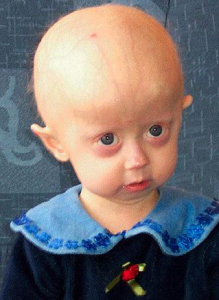 p53 is a tumor suppressor protein that prevents the development of cancer in humans.  In fact, the gene coding for p53 is the most commonly mutated gene in human cancers.  When a cell encounters stressors such as DNA damage, p53 responds by mediating cellular responses between apoptosis, cellular senescence, and DNA repair. These responses are coordinated with the ultimate goal of maintaining genomic integrity. 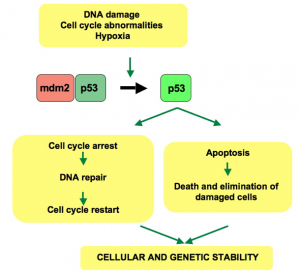 Too much of a good thing?

It would therefore appear that enhanced levels of p53 would be beneficial in human cells, right? After all, progerin has been shown to activate p53, and p53 does work to reduce the occurrence of cancer.

Interestingly enough, too much p53 has been linked to the onset of an early ageing phenotype. The mechanism by which progerin activates p53 is unknown; however, research suggests that the production of progerin leads to p53 dependent premature senescence, in amongst other clinical manifestations including genetic instability and abnormal nuclear morphology.  It is important to remember that cellular senescence plays an important role in the normal aging process: as telomeres shorten, the cell enters a state of cell cycle arrest.  However, in HGPS patients this survival mechanism begins to hinder more than it helps the cells.

Much effort has been and continues to be directed towards the treatment of HGPS.  The ultimate goal of this research is to decrease the levels of progerin produced, thereby mitigating the symptoms of this syndrome. So far, the pharmaceutical industry has been developing drugs that are aimed at controlling and rescuing the heterochromatin organization that is often altered in HGPS patients.  One drug, called Mevinolin, acts as a farnesyl-transferase inhibitor, which prevents the addition of a critical farnesyl group in the formation of progerin.  A second compound, called Trichostatin A, is being investigated, as it acts as a histone deacetylase inhibitor and may be effective in preventing chromatin rearrangement in HGPS patients. 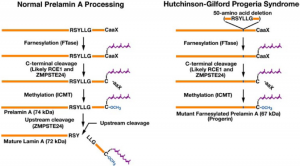 Advancements in the treatment of HGPS not only benefit patients of this syndrome, but also increase the scientific community’s understanding of cellular mechanisms and other physiological processes altered by rare diseases.

This work by Emily O'Reilly is licensed under a Creative Commons CC-BY Attribution 4.0 International License.

The True Power of Stem Cells