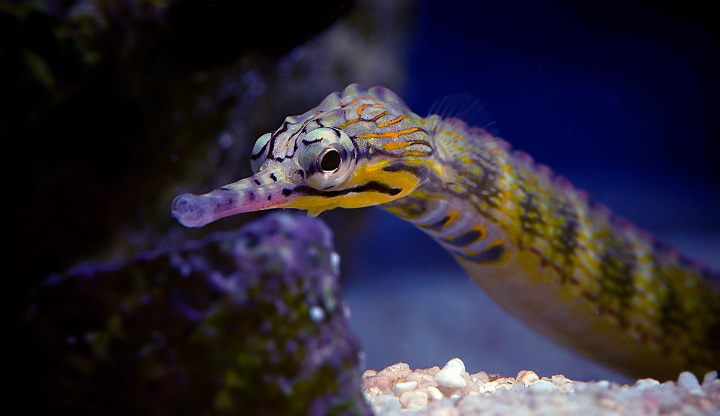 The Eelusive Genetic Secrets of the Pipefish

As a child visiting the aquarium I’d always found the thin, long little “tubey” fish that would float in and out of the sand to be fascinating. Those pipefish were different from the other fish, lacking limbs and fins, having a strange slender body. As well I’ve always been agog to see the pregnant Syngnathids in the aquarium, armed with the knowledge that it was the males who were carrying the babies. I’ve often wondered what evolutionary or genetic mechanisms had led to these bizarre and unique phenomena. Since those days, I have learned about hox genes, genes which define the way structures develop in an embryo in different segments of its body. Hox genes act to assign an identity to each segment of an organism’s body. For example, the genes active in the head will promote the growth of mouth components as well as antennae on a fruitfly, and the hox genes actively working in the thorax will promote the growth of legs and wings.

So what makes the pipefish unique?? Well, pipe down and I’ll tell you

Pipefish are a unique, long, slender-bodied fish that are related to seahorses, and are in the Syngnathid family of fishes. Their name comes from the long, thin “pipe” shape of their snout. They like to reside in sea grass, corals, and splendidly sandy lagoons. Pipe fish come in a variety of vibrant to dull patterns and colours, with even some that can change colour to camouflage into their surroundings.

Fishes typically share basic anatomy in terms of the vertebrate body plan. This notfishstanding, there are variations in features like jaw shape, fin placement and skeletal elements. The Syngnathid family possesses a very distinctive, long body plan. This is because Syngnathid genomes have demonstrated that the loss of specific genes are accountable for the evolutionary alterations that have shaped the pipefish body. Via evolution, the genomes of the pipefish have lost genetic elements in comparison with their distant fish ancestors. This is a feasible explanation as to why there are changes in body positioning and the pitx and tbx genes are both lacking in the seahorse and the pipefish. These genes engage the top of the regulatory cascade that is required for the development of hindlimbs in invertebrates. It is an interesting lobstervation that when CRISPR/Cas9 editing was used to eliminate the tbx4 gene from zebrafish, the fish neglected to grow a pelvic fin, however there were no other changes observed in their morphology. Gene losses in the hox genes of pipefish have resulted in the evolution of Syngnathid traits, such as their elongated form and the loss of ribs, teeth, and pelvic fins.

You might be thinking “For Cod’s hake, tell us why male pregnancy occurs!” Well, allow me to school you

Bass-ically, the uncommon male brooding behaviours of the pipefish are a rare occurrence in the animal kingdom, where the male fish is the one that gestates the offspring, rather than the female. In case you’re hard of herring, this means pregnant male fish! This phenomena occurs in Syngnathid fishes, including pipefish, seahorses, and leafy sea dragons. While they do not produce the eggs, the male pipefish accept the eggs from the females, fertilize them, and carry them in their brooding pouches. In this unique reproductive method, the male will incubate the developing embryos in the brooding pouch which is specialized for this task, keeping the embryos aerated and protected as they develop, nourishing them until they hatch. Researchers have discovered that this out-ray-geous occurrence is caused by a specific gene which supports the brooding pouches in the males and allows these pregnancies to transpire. A gene called patristacin was found by researchers to be expressed very highly in the brood pouches of pregnant male Gulf pipefish, suggesting that patristacin plays a major role in the evolution of Sygnathid male pregnancies. This gene supports the protective brooding pouches of the male pipefish, and regulates the saline levels of the pouch. Researchers have found that patristacin supplies the instructions for the cell to produce astacin, which is a multi-function-performing protein family. When new species start evolving, some genes get copied. These newly made genes will perform new different tasks. The researchers were keen to mention that patristacin is not a copy, rather it is a gene that has tackled a second job. The researchers found that patristacin was plausibly acting in the functioning of the kidney and liver several thousand years ago, and has evolved to act in the maintenance of the brooding pouches of male pipefish and seahorses. 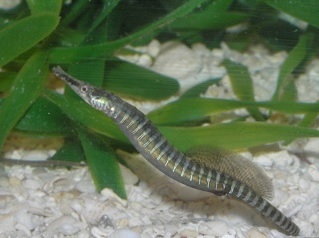 While male pregnancy and a long tubular body plan in the animal kingdom is few and far between, the pipefish is an excellent example of the amazing diversity of life on earth and the extraordinary evolutionary mechanisms that shape the creatures that inhabit it.

Now I know you’ve just about haddock with these puns, but I’m just going to leave this here:

What’s the difference between a piano and tuna?
You can tuna piano, but you can’t piano a tuna