Can coffee change our blood type?

The average university student is pretty much always tired. It’s quite a task to balance studying, sleep, and a social life. However, the wonderful beverage known as “coffee” enables a busy student to go about their days and accomplish the impossible.

Got a paper due tomorrow that you haven’t started? Don’t worry, our good friend coffee will be there to save the day.

Coffee isn’t only good for helping us be active members of society instead of sleep-deprived zombies, but is also pretty good for our health. Despite notions that coffee can cause “madness” and other illnesses, it actually has many benefits – in moderation, of course. For example, there has been a link found between regular coffee consumption and a decreased risk of cardiovascular mortality.

But that’s not it! If you drink a cup of black coffee an hour before working out, it can help improve physical performance by 11-12%. Moreover, its magnesium and potassium ingredients can help you lose weight by helping your body use insulin. It can also reduce risk of cancers, stroke, Parkinson’s disease, and Type II diabetes.

The coolest thing about coffee though, is that it can change blood type. Yeah, you heard that right. Okay well, before you start thinking that if you drink coffee your blood will magically change the antigens you have… I should let you know that the process only happens when a certain enzyme is extracted and manipulated in a lab setting. So no, your regular seven cups of coffee a day will do nothing of the sort in your body.

Let’s go back to the basics

In 1901, an Austrian immunologist by the name of Karl Landsteiner discovered that erythrocytes in some people would agglutinate if another blood type entered their system. This led him to the identification of the major blood groups – A, B, and O. This classification is based on the presence or absence of certain sugars on the surface of red blood cells (RBCs). While all three groups have fucose, galactose and glucose; type A has an additional sugar called N-acetyl-glucosamine and type B has one extra galactose molecule.

These sugars are also known as antigens which Landsteiner appropriately named “A” and “B”. The agglutination of the RBCs is caused by antibodies which recognize different antigens as foreign and attack them. The immune system creates antibodies against whichever blood group antigens are not present on the individual’s RBCs. You can think of these antibodies as bouncers at a club and the foreign antigens as minors. As bouncers would not let minors enter a club, antibodies are not going to be happy when a foreign antigen enters the circulatory system. For example, if type B blood was placed inside an individual who had type A blood, the antibodies would recognize the B-antigens causing an immune response.

Later on, in 1910, it was discovered that RBC antigens were inherited from our parents. A and B were found to be codominant – which is why type AB exists – whereas O was recessive. However, people were not really sure about the mechanism of inheritance until 1924 when Bernstein came out with the “three allele model”. This model explained that the antigens were encoded by one genetic locus (ABO locus) which had three alleles – A, B and O. Therefore, six genotypes and four phenotypes are possible. 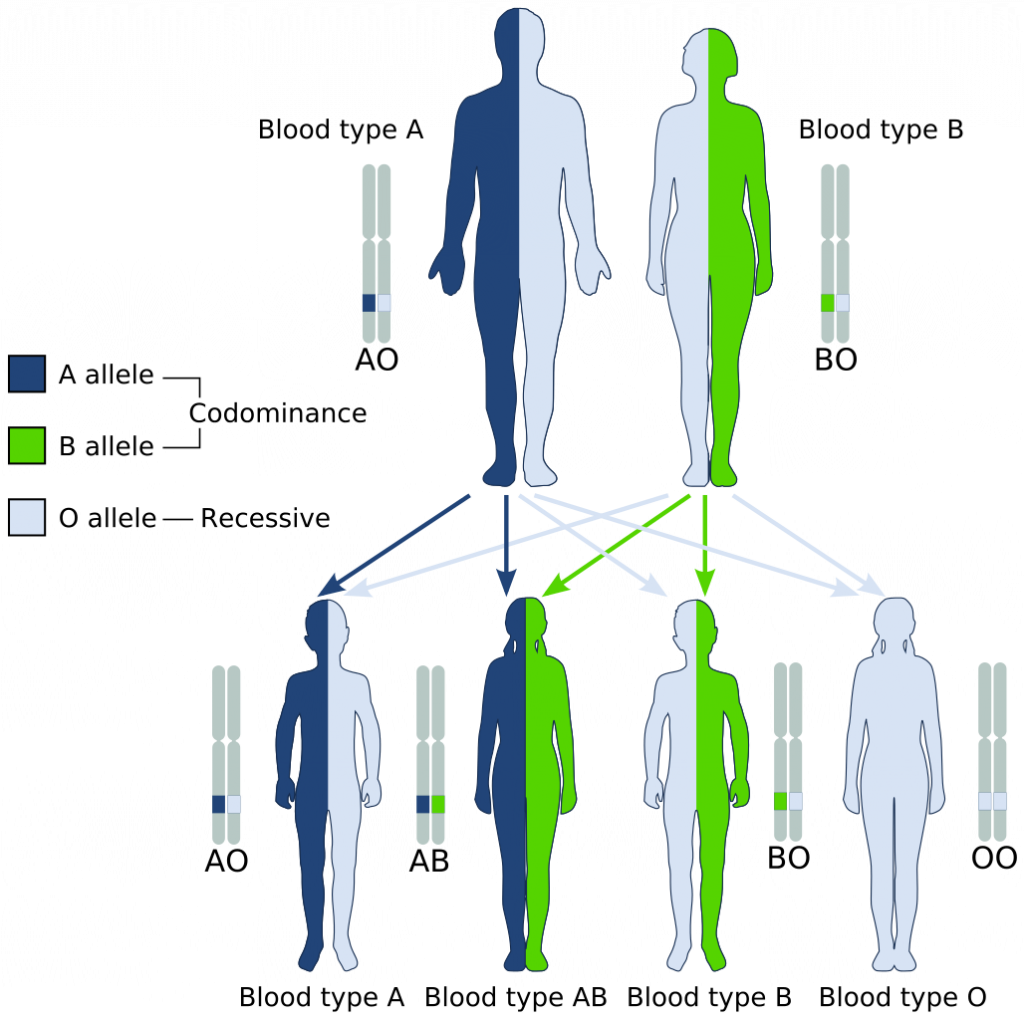 The third blood phenotype – O – was found not to be rejected by any host because it did not have A nor B antigens. Therefore, the immune system of a person with Type A, B, or AB, will not attack Type O blood as their antibodies have nothing to recognize and fight against. The bouncer is still there but no one is there asking to come into the club, almost like they’re wearing an invisibility cloak. On the other hand, the fourth blood phenotype – AB – has both antigens present and therefore no antibodies. This means that it can accept any other kind of blood without rejection. This is a situation in which there is no bouncer so the club is “bumping” and ready to invite anyone. However, if this party tries to move into another body, the bouncers at the other club will still be ready to kick them out.

As mentioned, RBCs in the plasma of one blood type cannot be transfused into a person with another blood type because the antibodies will coat these red blood cells and destroy them. However, it is not only due to agglutination as first thought but also because of complement pathway activation and induction of membrane attack complexes that lyse the cells. If this occurs in a living patient, an acute intravasal hemolytic transfusion reaction will occur causing hemoglobinuria, back pain, chest pressure, and hypotonia. Basically, all kinds of stuff that you don’t want to happen to you.

Well that’s what takes us…

In 1982, an enzyme in green coffee beans was found to change type B blood into type O blood. The enzyme, alpha galactosidase, could strip off the B-antigen from type B RBCs which essentially converted them into type O blood. After successful transfusions in animals, the study moved to humans.

This was a huge discovery as it could allow for blood banks to always be in supply of type O blood. Since the transfused blood does not agglutinate, this conversion method could be used to ensure that blood banks were in constant supply of “universal donor blood”.

However, as cool as coffee is, it has been found that the enzymes from the bacterial kingdom are much more powerful and efficient. An enzyme from Bacteroides fragilis removes the B antigen and another enzyme from Elizabethkingia meningosepticum removes the A antigen. The B. fragilis enzyme is used at only one-thousandth the rate of the coffee bean enzyme. Further research is also being done by mutating enzymes, if you’d like to check it out!

Despite not being the most efficient, coffee still had its time to shine as it was the first substance which was found to have an enzyme that could convert blood into the universal donor type O.

Moral of the story, coffee is multi-talented – here to save our grades as well as our blood banks.

The Immune System: Hero or Accomplice?