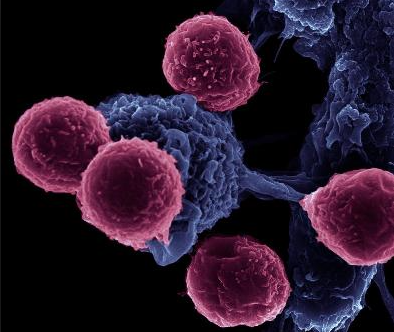 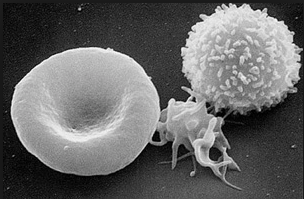 The picture was taken with a scanning electron microscope of a T cell (right), platelet that helps blood to clot (center) and a red blood cell (left). The bumps on the T cell are T-Cell receptors used to fight infections (CDC – Wikimedia)

“In the ultimate betrayal, one’s immune system can turn against the protective sheath that envelops neurons in the brain, leaving the body paralyzed.” Recent research on the immune system in rodents has discovered an experimental treatment to return the power of movement to paralyzed mice. This surprising discovery can be used to someday combat autoimmune diseases in humans such as multiple sclerosis and type 1 diabetes.

Multiple sclerosis in particular impacts more than 2.3 million people worldwide. In MS, the body’s immune system mistakenly attacks the protective coating around the nerve fibers in the central nervous system, which leaves scar tissues in multiple areas. This damage causes signaling problems to the brain and spinal cord and results in patients experiencing a variety of neurological impairments including paralysis. With millions of people being affected by MS, there are lots of ongoing studies to improve the current therapies. According to Christopher Jewell, Ph.D., the present immunotherapies are not specific. They act broadly, compromising the entire immune system and putting the patient’s health at risk rather than focusing on only those immune system cells doing the damage. 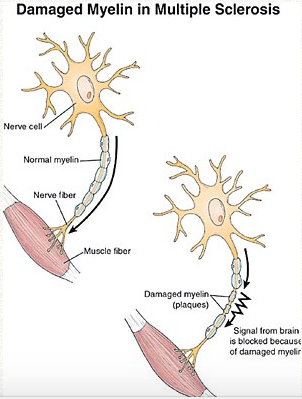 Comparison of a healthy neuron to a damaged neuron due to MS. licence under creative commons.

At the University of Maryland, in Washington DC, Dr. Jewell and his team of scientists created a specific immune response targeting the lymph nodes. In an autoimmune disease, the body-roaming immune cells recognize an antigen (a molecule that the cell in this case falsely identifies as a piece of a foreign invader) and brings it to the lymph nodes where the T cells are then programmed to attack the antigen. In the case of MS, the T cells are taught to recognize and attack the myelin sheath. This attack on an important part of the central nervous system causes paralysis in many patients. Jewell thought it might be possible to prevent the T cells from attacking the myelin sheaths by delivering an immune-system modifying agent directly to the lymph nodes. The researchers constructed a particle from poly (lactide-co-glycolide) polymer to serve as a carrier for the immune-suppressing agent and a myelin antigen to “teach” the T cells that the myelin is not an antigen. 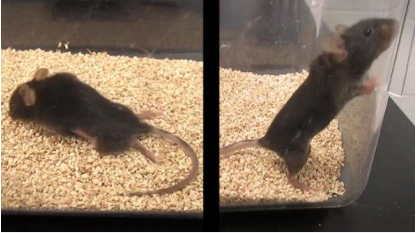 Picture from video showing mouse before and after injection of substrate

When this polymer was injected into the lymph nodes of paralyzed mice exhibiting multiple sclerosis, the particles slowly reprogramed the T cells to stop attacking the myelin sheath. These mice regained the ability to walk, and the effects lasted the duration of the 80-day study. The mice also exhibited a healthy immune response to other foreign molecules suggesting the treatment did not compromise the rest of the immune system. By this scientific breakthrough, the mouse had reversed the symptoms of MS and regained all mobility without harming the rest of its immune system.

This new research is an extraordinary step for a cure to immunodeficiency diseases. Later this year, more research will be done on non-human primates to investigate this idea as a future human therapy. As there was no harmful impact to the mouse, this approach may someday combat autoimmune disease in humans and may just be the cure for multiple sclerosis.